Burnt by the Sun 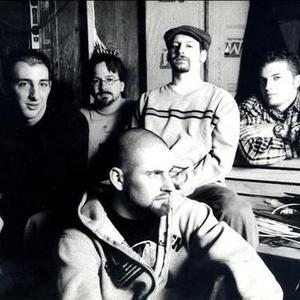 "We were tired of being let down by buying records that failed to deliver what they promised so we set out create something to our standards that we would want to hear from a band," said drummer Witte.

No sooner had the band expanded to a quintet than it polished up its first half-dozen songs and made its live debut on the Relapse Stage at 2000's March Metal Meltdown. BURNT BY THE SUN made its unique and formidable presence felt immediately. Relapse was quick to respond.

The band entered Sweetwood Sound Studios in May with DALEK's Alap Momin (THE VAN PELT, RYE COALITION) at the production helm to cut the first seven songs they'd written. Three of those tracks (ironically enough the first three songs written) became half of a split CD EP with fellow Jersey grind-troupe Luddite Clone, while an early version of the devastating "You Will Move" was contributed to CONTAMINATED 3.0, the Relapse 10th Anniversary compilation.

BURNT BY THE SUN spent the next several months honing their material and live show with a series of jaw-dropping performances. Attendees to NYC's Loud Az Fuck fest, Milwaukee Metal fest, the Northeast leg of the Contamination 2000 Tour as well as numerous weekend excursions through the Northeast witnessed the band's increasingly devastating live performances. Word was quick to spread.

The band spent a bit of additional time at Sweetwood in the early fall re-working the remaining tracks. Those tracks would form their Relapse debut.

That self-titled CD EP featured the band's cerebral, yet visceral futuristic quasi-metal/hardcore hybrid. Songs such as "Buffy" and "You Will Move" are equal parts guitar skronk and frenetic fret board gymnastics, vocal savagery and superhuman drumming.

The band's compositions were meticulously dynamic, paying as much attention to deft nuance and fluid transition as much as being high velocity displays of brute force. The end result was a relentless fusion of post-everything virtuosity that left behind the charred remains of convention and sterility with a scorched earth policy of progression, aggression and perpetual motion.

As different as the band is musically, their unique lyrical approach is miles apart from the standards (or lack thereof) set by may of their peers. "Singing tales of hell may very well go with the heaviness of the music, but songs about issues happening in the world around us are more moving because they are what makes the world turn. People go to wars over these issues and to think politics has no place in music is dismissive because it ignores so much," says vocalist/lyricist Mike Olender. "The point behind the song titles is to illustrate that BURNT BY THE SUN doesn't take itself too seriously however," Olender continues. "There are too many people out there that wear their politics or beliefs in such a fashion that it prevents other aspects of their humanity from being exposed. What is important is to me is keeping life in perspective; keeping a sense of humor and humanity in check with who I am as a human being."

Immediately after the release of the CD-EP the band added a new second guitarist in Chris Rascio (ex-TIMES UP) without missing a beat on the live front.

"Soundtrack to the Personal Revolution," the quintet's first full-length, was recorded with producer/engineer Matt Bayles (PEARL JAM, SCREAMING TREES, BOTCH, ISIS, etc.) at Trax East Studios. BURNT BY THE SUN developed its signature, frenzied-style into an incisive and efficient burst of sound punctuated by profound guitar precision, striking hooks, and a deft rhythm section. "Soundtrack to the Personal Revolution" was a detailed study in the forward motion of intelligent heavy music.

As one of the most revered new acts in modern heavy music, BURNT BY THE SUN administer a deft fusion of artistry and ferocity on its much anticipated new full-length, "The Perfect is the Enemy of the Good." With a sleek combination of metallic hardcore, post-punk pummel, artful arrangements and raw, unrelenting power, BURNT BY THE SUN trailblaze heretofore unexplored musical paths. Blending astounding dexterity, a scorching attack and another brilliant production from Matt Bayles (ISIS, VENDETTA RED, MASTODON, BLOOD BROTHERS) BURNT BY THE SUN continues heavy music's ongoing evolution.

Burnt By the Sun released their acclaimed final album, "Heart Of Darkness", on Aug. 18th, 2009. The band plans to break up after this release.

The Perfect Is The Enemy Of The Good

Soundtrack To The Personal Revolution

Burnt By The Sun (EP)