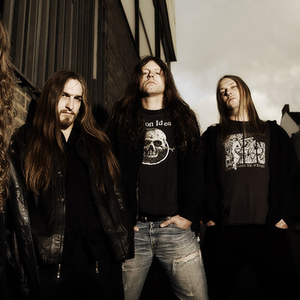 Germany's Dew-Scented have been part of the leading forces of a new breed of Thrash Metal ever since their foundations in 1992. After having released their first an only demo tape "Symbolization" the band signed to Steamhammer/SPV for their 1996 debut release "Immortelle" and then moved over to Grind Syndicate Media/NBR as new label-home for 1998's Dan Swan&ouml; mixed "Innoscent" and 1999's "Ill-Natured" albums.

Up to then the band had already performed and toured all over Europe with acts such as Overkill, Edge of Sanity, Morbid Angel, Deicide, Six Feet Under, Amon Amarth, Naglfar, Brutal Truth, Dismember, Eucharist, Annihilator, Arch Enemy, Immortal, Death, Tankard, Vader and many more and even visited Japan for a four shows alongside Defleshed and Night In Gales.

2002's "Inwards" release opened a lot of new doors for Dew-Scented, especially internationally, as this was the first album released directly on Nuclear Blast Records all over Europe, North- and South-America, as well as in Japan via Soundholic Records. "Inwards" also marked the first cooperation with sound-wizard Andy Classen / Stage One Studio (Krisiun, Disbelief, Holy Moses, etc.), who would also produce the upcoming two albums. "Inwards" was noted as "album of the month" in several leading publications (as Rock Hard or Legacy in Germany) and was supported by a full European tour with Cannibal Corpse, a tour in France with No Return and Scarve, a week of shows opening for the German Thrash Metal trinity - Kreator, Destruction and Sodom -, the band's North American live-debut at the Milwaukee Metalfest and several large European festivals like With Full Force, Summer Rocks, Party-San, Metalfest Vienna, etc.

Their 2003 release "Impact" as well as the re-mastered re-release of "Ill - Natured & Innoscent" (both albums on one disc!) via Nuclear Blast Records continued the positive media reactions and further established the band as one of the leading forces of European extreme Metal. Dew-Scented undertook a full European tour with Nile and Misery Index, which melted into the "X-Mass Festivals" with Destruction, Deicide and Amon Amarth, plus also appeared at festivals like Wacken Open Air, Summer Breeze, Tuska, Fury Fest, Pressure, Earthshaker, Metalcamp Tolmin, Up From The Ground and also returned to North American soil for the New Jersey Metal And Hardcore Fest.

By that time, Obscenity's Alexander Pahl joined the band permanently on bass, after already being with the band for live-shows since 2002 and guitar player Flo Mueller left bringing in longtime friend and live guitarist Marvin Vriesde (Blo.Torch / Severe Torture) into the band to gear up for their 2005 album "Issue VI". The album continued to relentless stylistic approach of the band flawlessly and also featured a limited edition bonus DVD including the video clip for "Turn To Ash" (the band's first ever promotional video clip) as well as 17 (!) live songs recorded at diverse shows between 2002 and 2005. "Issue VI" campaign saw Dew-Scented deliver their most dedicated live-attack in history: Touring started over in Japan with the "Extreme The Dojo" tour together with High on Fire and Misery Signals, then a full European tour supporting Nevermore. On this tour, Reno Kiilerich from Denmark (ex Dimmu Borgir, Panzerchrist, Vile, Hate Eternal) stood in on drums, replacing Uwe last minute for logistical reasons. In November 2005 Dew-Scented made their debut coast-to-coast tour in North America, supporting Vader and Decapitated for 4 weeks all the way through the USA and Canada. The live-run in promotion of the current album, seeing Flo Mueller return to the fold, was crowned with an intense European tour in February 2006 alongside Cryptopsy, Grave, Aborted, Vesania and Hurtlocker. The so-called "The Domination Tour" covered 12 countries with a total of 31 shows and not a single off-day.

By the Summer of 2006, Dew-Scented got together to finalize songwriting for their new album's material. This time the band is scheduled to record at J?rg Uken's Soundlodge Studios (God Dethroned, Obscenity, Mandrake, etc.) and then mix with sound-legend Andy Sneap (Machine Head, Arch Enemy, Testament, Kreator, Killswitch Engage, etc.) at his Backstage Studios in England.