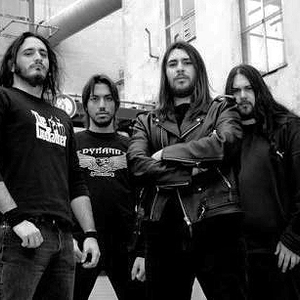 Suicidal Angels is a thrash metal band from Athens,Greece and was formed by Nick in early 2001. The very first line-up consisted of Nick (guitar/vocals) and Kostas (bass) and the musical steps the band followed were in old school thrash metal (something that hasn't and won't change!). That can be heard in the first demo, "United by Hate" (July 2001). After rehearsals and some early line-up changes, the band welcomes Orfeas (drums). With this line-up (Nick ? guitar / vocals, Kostas ? bass, Orfeas ? drums), Suicidal Angels record their second demo, "Angels' Sacrifice" (December 2003).

After rehearsals and some early line-up changes, the band welcomes Orfeas (drums). With this line-up (Nick ? guitar / vocals, Kostas ? bass, Orfeas ? drums), Suicidal Angels record their second demo, "Angels' Sacrifice" (December 2003). Based on this demo CD, the band starts promoting itself and the first concerts are scheduled.

During April 2004 Suicidal Angels record a new demo CD called "The Calm before the Storm", which receives good reviews in metal magazines and fanzines throughout Europe. Later on this year, Kostas leaves the band and is replaced by John. As the need for a second guitar player is growing, Thanos joins Suicidal Angels.

In September 2004, the band releases an EP called "Bloodthirsty Humanity", which receives even better reviews, compared to the previous demos. Thanos leaves to join the army and Themis replaces him, at first as a session member and later on as a full one, as Thanos and the band decide to go on separate ways. During a long period of time the band cannot find a bass player to replace John who decided to leave. Session bass players help with concerts and recordings: Thodoris Parallis helps the band with their headlining show in Bucharest (Romania) and Nikos Sakkas plays the bass when Suicidal Angels invade Poland (Malbork Metal Days Festival, July 2005). After some search, Suicidal Angels welcome Christine as their new bass player and continue to deliver fast and furious thrash metal throughout Greece.

During Fall/Winter of 2005 the band records a 4 song mini CD called ?Armies of Hell? which gets distribution by LIVE RECORDS and hits the stores in early 2006. The reviews are very encouraging, topped by the ?Heavy? review (Germany, issue 90), which granted a 9/12 to the band's effort.

In April 2006, Christine decides that the band is not a top priority for her anymore and leaves, only to be replaced by Sotiris shortly after. The band continues performing live in concerts all over Greece and abroad. Some of the bands that Suicidal Angels have shared the stage with are Kreator, Celtic Frost, Behemoth, Tankard, Onslaught and Napalm Death.

In 2007 the band toured for the first time in Europe, supporting Rotting Christ as part of the ?Theogonia Balkans tour 2007?. Moreover, Suicidal Angels signed to California based OSM Records, which released the group's first full length album, ?Eternal Domination?, on July 16, 2007. The album received very good reviews worldwide and the band embarked on a never ending journey promoting it. In November 2007, Suicidal Angels toured along with Massacre in Europe, as part of Massacre's reunion tour, and are also scheduled to tour along with legendary thrash act Onslaught in March/April 2008.

Be prepared for hyperfast, technical, neck breaking thrash metal for, when it comes to Suicidal Angels, this is the only metal you'll get!