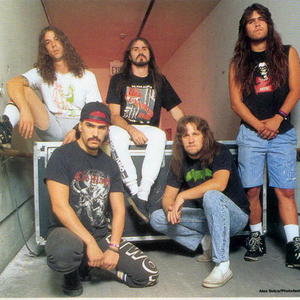 Vio-lence was an American thrash metal band formed 1985 in San Francisco, that released a few demo tapes, one EP and 3 LPs between 1985 and 1993. After establishing a secure line-up with Phil Demmel and Robb Flynn on guitars, Dean Dell on bass, Perry Strickland on drums and Sean Killian on vocals, they released a demo tape on Mechanic Records in 1986. Soon after releasing their demo tape they entered the studio to record their debut album, called Eternal Nightmare, a seven track album released in 1988.

After establishing a secure line-up with Phil Demmel and Robb Flynn on guitars, Dean Dell on bass, Perry Strickland on drums and Sean Killian on vocals, they released a demo tape on Mechanic Records in 1986.

Soon after releasing their demo tape they entered the studio to record their debut album, called Eternal Nightmare, a seven track album released in 1988. Eternal Nightmare suffered in lack of promotion despite being well accepted by the thrash audience, and critics.

Together with the band Forbidden, they were labelled the new promises of Bay Area thrash and in 1989 they struck a deal with Megaforce Records to release their second album, titled Oppressing The Masses. Around that time, Perry Strickland substituted Tom Hunting of Exodus, yet only for a few shows, denying the possibility of staying permanently.

Finally in 1990, Oppressing The Masses (with legendary producer Alex Periales) was launched on Megaforce Records with better distribution and marketing than their debut, Eternal Nightmare. A video for the song "World in a World" has also been filmed.

Internal conflicts in 1992 resulted in Robb Flynn's departure from the band. He, along with Adam Duce, Logan Mader and Tony Constanza formed the seminal groove band Machine Head. Vio-lence started to record their third and last studio album aptly titled Nothing To Gain, which was released in 1993 and was followed by Perry Strickland's departure, the result of the drummer's decision being the dissolution of the band.

Phil Demmel, Dean Dell, Ray Vega and Mark Hernandez formed a half-thrash band called Torque which disbanded after releasing a studio album and playing several live shows. Demmel then went to form industrial rock band Technocracy. Robb Flynn remains active in the metal community as the guitarist and singer of Machine Head. Phil Demmel is now in Machine Head and has been since before the release of Through the Ashes of Empires.

Vio-lence has re-released its debut album Eternal Nightmare as a 2-disc set including rare tracks and a live concert.

Initially planning only a few shows as part of the tribute to Testament's Chuck Billy during the Thrash Of The Titans benefit, the band decided to reunite with early guitarist Troy Fua replacing Robb Flynn.

In April 2003, the other guitarist Phil Demmel, joined Machine Head as a full-time member after previously serving as a temporary guitarist which ended the Vio-lence comeback trail.

In addition to their 2005 re-release of Eternal Nightmare, the band released a 7 inch vinyl record containing two demo tracks from their original 1986 demo tape as well as one previously unreleased track. Only 1000 copies were produced and pressed by BoneCrusher Records. The 7 inch collectible was well marketed and advertised, but due to disagreements between the band and the BoneCrusher record producers, only Vio-lence was allowed to distribute and sell the 500 given to them by the producers. A deal was made to distribute a small quantity (about 100) through a Seattle record store, the only known store to stock the item for sale to the public.

A DVD entitled Blood And Dirt was produced by Tales From The Pit Productions and released on August 8, 2006 through Megaforce Records.