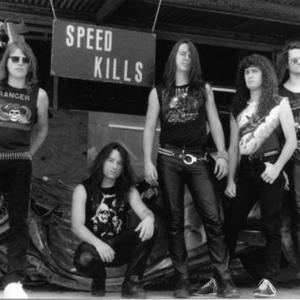 In early 2005 DeAcutis announced a new band project billed THE WAY in union with Russell Arcara, known for his vocal work with PROPHET, SURGIN and ARCARA, and keyboard player Charlie Calv, the latter a scene veteran of SHOTGUN SYMPHONY, SKIN TAG and THE BRONX CASKET CO..

3). An alternative electronica/ band from Belgrade, Serbia. Active from 1991 to the present day, published six albums, latest in 2006. Homepage

Intruder was founded by Neboj?a Markovi? and Ivan Halupka in the early 90s.From the very beginning Intruder has been experimenting with electronic music and it..s various subgenres (techno, drum'n'bass) to finally reach the music form that can be mostly described as electropop: pop in structure, subversive and energetic in sound, but at times also very emotional, dreamy and jazzy. As a duo Intruder released 2 albums (album no.1 ..Experiment.. in 1998. and album no.2..Windows ..99.. in 1999.), that became very successful throughout Serbia and had 4 No.1 radio singles, and 3 No.1 videos on the most popular and influential stations charts (Studio B, RTS, B92).That success made way for Intruder's 3rd album Able (2000.), and at the end of the album realization, Intruder became a trio, gaining a guitar player, and begun performing live throughout Serbia.

Very soon, Intruder became a band of five, joined by the drummer and another guitar player. Very successful tour saw the band having festival performances, the highlight being the crowded performance at EXIT festival 2001 on Main stage alongside with Kosheen (UK).

As the touring continued, Intruder gained a leading lady - singer Ivana. Intruder, now with Ivana..s fantastic soulful and emotional voice added a new dimension to their unique blend of energetic [tag[pop, electronica, grooves and jazz-the result was the band's fourth album Strange kind of beautiful (2003) and the biggest hit to that moment (single Melt).

After another tour and appearances at regional festivals (Nisomnia, Beer fest, Electronic festival), Intruder slowly began recording new material for the 5th album. Even before the album was released in 2006, 2 singles accompanied by videos became absolute smash hits in 2005 (Soundtrack and Why don't you) not only making it to No.1 spots on singles and videos charts on almost every station but also providing the band with the title band of the year by people's votes on one of the most influential programmes - Studio B.

At the end of year 2005, gigs began again, and by the release of the album no.5 Dancing shoes, starry skies in 2006 video for the single no.3 off it Sensation became MTV Adria hit. The band had another memorable performance at EXIT 2006 on one of the main stages - Fusion stage that also hosted Susanne Vega, Junkie XL etc.

At the beginning of 2007, Intruder released another no.1 single from the current album Stay - it was premiered at MTV Adria in early spring 2007.During year 2007, Intruder had festival performances (EXIT Winter tour, Serbia film festival in Novi Sad, ?abac summer festival?) and performed most recently in September at ANIMANIMA ? international animation festival in ?a?ak and THIS IS MY TOWN ? electronic bands and DJ festival in Belgrade. Finally, Intruder has been nominated for a new MTV award ? THE NEW SOUNDS OF EUROPE, which has a goal of bringing forth the freshest music acts throughout Europe, and performs in Zagreb on 29th of September in a NEW SOUNDS OF EUROPE live show with other Adria region nominees.At the end of the year INTRUDER received VIDEO OF THE YEAR 2007. award by TV Metropolis music television.INTRUDER are very recognized for their unique and breakthrough video work, and have been collaborating with the most talented fresh directors, animators and designers in Serbia (Stefan Arsenijevi? ? Oscar nominee for best short film and Berlin festival winner, Nikola Vulovi?, Andrijana Stojkovi??).After taking part in the soundtrack for one of the best animated films in recent Serbia history, Nikola Vulovi?'s THE JANITOR, INTRUDER music is featured in Stefan Arsenijevi?'s acclaimed movie debut LOVE AND OTHER CRIMES, which after the highly successful Berlin film festival premiere won award for best direction and viewer's choice award at Sofia and Linz (in only one month in 2008) INTRUDER are currently working on new songs for the upcoming album no.6?..

A Higher Form Of Killing