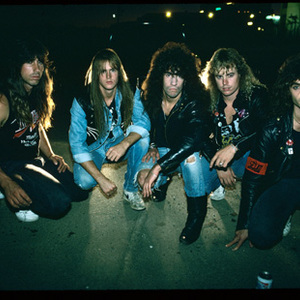 Founded in the bay area hills of Berkeley, California in 1982, vocalist Michael Coons and guitarist Aaron Jellum began forming the heavy metal band that would come to be known as LAAZ ROCKIT. These guys were young (Coons, at 17, was just finishing high school and Jellum, 18, was busy attending college and riding motorcycles), but they both knew the musical direction they wanted to pursue. After doing a few shows with various members in the burgeoning bay area metal scene, Coons and Jellum came across guitarist Phil Kettner and drummer Victor Agnello in late 1982 and early 1983.

Bassist Willy Lange completed the true classic original line up later in 1983 that would record 4 albums and tour across the United States and Europe for the next 6 years.
San Francisco produced many of the golden-era metal acts (most notably, Metallica, Testament, Exodus, and LAAZ ROCKIT) and provided LAAZ with a rabid fanbase that caught the record industry's attention in America in 1983. LAAZ ROCKIT signed with Target Entertainment (the label that released RATT's original EP) that year and recorded their first album, "City's Gonna Burn" (still considered a classic) and released it in the spring of 1984. The album received great reviews and the tour in support of "City's Gonna Burn" established LAAZ ROCKIT's live show reputation as one of the most energetic of the metal genre.
In 1985, LAAZ released their 2nd album "No Stranger To Danger" and in 1986 made their first appearances in Europe supporting MOTORHEAD. This experience helped forge a new, heavier musical direction for the band and formed a unique relationship with European fans that has become legendary and still exists today.
The heavier direction proved to be genuine with 1987's release of LAAZ's 3rd album, "Know Your Enemy". This record is widely considered the band's best, by both fans and critics. It was the band's 1st worldwide release and songs like "Last Breath", "Euroshima", and "The Most Dangerous Game" showed the expanding musical direction and maturity.
1989 brought about many changes for the band. They released the powerful "Annihilation Principle", a stellar follow-up to "Know Your Enemy", featuring mosh-pit crushers like "Bad Blood", "Chasin' Charlie" and the intense first track, "Fire In the Hole", that provided the band's first video which was featured on MTV's Headbanger's Ball.
But 1989 also brought an end to the original line up that had spent 6 years together as brothers. Willy Lange, Phil Kettner, and Vic Agnello left for various reasons and only singer Michael Coons and guitarist Aaron Jellum remained.
The two founding members kept the band alive for 3 more years and recorded 2 more albums and a single/video track "Leatherface" for the movie "The Texas Chainsaw Massacre III?. After tours of the United States and Europe in 1991 and 1992, LAAZ ROCKIT's first appearance in Japan in 1992 would prove to be their last live appearances, even though the Japanese tour was a huge success.
After a 13 year absence, LAAZ ROCKIT returned in its original line up to play the prestigious DYNAMO Open Air Festival in May of 2005. LAAZ returned to their Bay Area stomping ground as they joined forces with many veteran bands for the benefit concert Thrash Against Cancer in San Francisco on July 9, 2005. This was a chance for their longtime faithful to see them once again after many years of absence. Next, they returned to Japan in September 2005 for the first time with the original lineup and put on an explosive show.

No Stranger To Danger