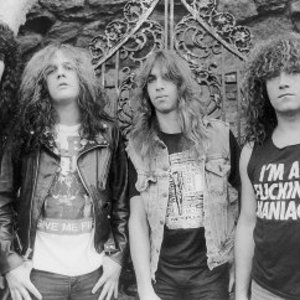 Hallows Eve was formed in Atlanta, Georgia in 1983. Founded by bassist/vocalist Tommy Stewart and guitarist/vocalist Skullator, this band is known as one of the earliest bands to pioneer speed and thrash metal. Three records were made in the 80's following the obligatory "Metal Massacre" compilation appearance, and they then disbanded, scattering to various local area bands. Many band members over the years have died and the band has gone through drummers to Spinal Tap proportions. Former drummer Rob Clayton died on 19 April 1992 in a car accident in which he was beheaded.

He was driving on I-65 in Alabama, when a drunk driver crossed the grass median and was driving on the wrong side of the road, and hit him head on. He was in the band called Jody Grind at the time, and was coming home to Atlanta after a gig in Pensacola, FL. In the van with him that also died were the Jody Grind's opening act, "Deacon Lunchbox", and bass player Robert Hayes. All three died instantly. The drunk driver lived, and served 2 1/2 years in jail for his crime. Another former drummer Ronnie Appoldt was shot to death in a drug deal in Los Angeles in 1985. In early 2004 Hallows Eve reunited by founding guitarist Tommy Stewart and included vocalist Steve Cannon. In May 2004 Steve was kicked out of the band and replaced by original vocalist Steve "Skully" Shoemaker (a.k.a. Skellator). A CD was released titled "Evil Never Dies" in 2005. A 4-disc best of compilation called "History Of Terror" was released in 2006. The band returned to the studio to record their lastest album "The Never-Ending Sleep" in 2008.