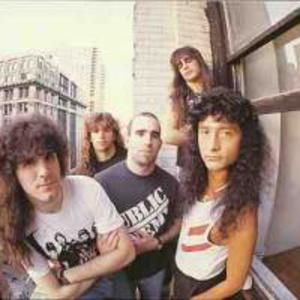 1) Anthrax are an American, New York City-based thrash metal band, who released their first full-length album in 1984. The band was one of the most popular bands of the 80s thrash metal scene and are notable for combining metal with rap and hardcore music early on. The band has sold over 10 million albums worldwide, and are classified as one of the ''big four'' of thrash metal bands alongside Metallica, Slayer, and Megadeth.

Anthrax were formed in 1981 by guitarists Scott Ian and bassist Danny Lilker. They found the band's name in a biology textbook and claimed it because it sounded sufficiently evil to them. Nowadays Anthrax consists of these members: Joey Belladonna on lead vocals, Charlie Benante on drums, guitarists Scott Ian and Rob Caggiano, and Frank Bello playing the bass.

In 1985 Joey Belladonna joined Anthrax, and in the same year, the band released their second studio album Spreading The Disease (which included the hit Madhouse). In 1987, Anthrax released their third album, Among The Living. This album began a lyrical trend that focused on movies, comic books, and Stephen King novels. For example, the song I Am The Law is a tribute to comic book hero Judge Dredd.

In 1990, Anthrax released the more serious Persistence Of Time to even greater success than State of Euphoria. The album was considerably darker but much more technical and progressive than Anthrax's previous work. This made it a hit with metalheads who were afraid to embrace the band because of their "silly" side. The biggest single off the album was a cover of Joe Jackson's Got The Time. The band's own original song In My World as well as Belly Of The Beast were also successful. Anthrax was always a band prone to experimentation; in 1987, they appeared on the title track of rap group U.T.F.O.'s album Lethal. In 1991, they collaborated with pioneering rap artists Public Enemy on a joint version of PE's "Bring the Noise", although Anthrax already did a fusion of rap and heavy metal in the form of "I'm the Man" in 1987.

In 1992, Anthrax parted ways with vocalist Joey Belladonna and replaced him with ex-Armored Saint vocalist John Bush. The band left Island Records and signed with Elektra Records to release Sound of White Noise in 1993.

Though it was quite a change from their earlier work (it was more a "heavy grunge" oriented, especially because of the vocals) , White Noise received mostly positive reviews and "Only" was a major hit (in the liner notes for Return of the Killer A's, Ian says James Hetfield once told him it was a "perfect song"). Bush's voice lent a gravitas and weight to a collection of well-thought-out and technically excellent tracks. In keeping with the band's now-trademark eye for unlikely collaborations, classical composer Angelo Badalamenti provided music for the track "Black Lodge," a tribute to the TV show "Twin Peaks". Importantly, the album demonstrated that the band had shed its sometimes cartoonish outlook in favor of mature, thoughtful songwriting, a trend which had begun on their previous studio album Persistence of Time.

During the hiatus between Sound of White Noise and Stomp 442, longtime guitarist Dan Spitz left the band to quit music and become a watch maker, leaving Anthrax as a quartet for years. In 1995, the band released Stomp 442, an album for which Elektra refused to provide real promotion?it quickly disappeared without a trace. Obviously upset at what they felt was an attempt by the label to kill the album, Anthrax attempted to sever ties with Elektra.

Anthrax signed with independent label Ignition Records, and in 1998 managed to release Volume 8: The Threat Is Real, a punishing album that had the potential to return Anthrax to the top of the metal heap. Unfortunately, almost immediately after Volume 8: The Threat Is Real's release, the label they were signed to went bankrupt and disappeared, making the album difficult to find. Regrouping, the band signed with another label, Beyond Records, and released a greatest-hits album Return of the Killer A's, although Beyond soon went out of business as well.

Despite the hardships and various legal entanglements regarding who had the rights to certain albums, Anthrax managed to soldier on. In 2002, new lead guitarist Rob Caggiano joined the band, and the following year the band released We've Come for You All, through Sanctuary Records?an album hailed by the metal press as a long-awaited return to form.

The Reunion
On April 1, 2005, the official website announced that the Among the Living lineup of Scott Ian, Charlie Benante, Dan Spitz, Joey Belladonna, and Frank Bello would be reforming. On solo-dates of the tours, for the first time ever, they performed the entire 1987 classic album Among the Living. However, Joey Belladonna left the band again after the tour was finished.

2007
Anthrax have now officially confirmed that they have recruited former Devilsize singer Dan Nelson. In addition, former lead guitarist Rob Caggiano has returned to the band as well.

On May 28, 2008 Anthrax played their first show in 19 months at The Double Door in Chicago. Along with new singer Dan Nelson, the band played new material which was well received by the sold-out crowd. This was despite having some equipment problems?which the band took in stride with the classic humor for which they are known.

In his monthly Food Coma column, which was posted on December 22, 2008, Anthrax's Scott Ian revealed that he'd "been in the studio working on the new Anthrax album since November 4." Ian went on to say that drums, bass and rhythm had been laid down on a total of 19 tracks, and that the process of laying down vocals had begun. "We should be mixing at the end of January and soon after that giving birth to a really pissed off, loud, fast and heavy child." In a post to the Anthrax website, Charlie Benante stated that "Worship Music should be out in May".

2) Anthrax were an anarcho-punk band formed in Gravesend, Kent, England in 1980. They recorded their first demo in 1981 and went on to release two 7? EPs on Crass Records and Small wonder. They appeared on compilations released by Crass Records, Mortarhate Records and Fightback Records. They toured outside the UK twice in the Netherlands with Dutch band The Ex. In 2007 the band compiled a compilation CD entitled One Last Drop which includes both demos, both EPs, the Mortarhate compilation track and 2 live tracks.

A Monster At The End (CDS)

For All Kings (Limited Edition) CD2

For All Kings (Limited Edition) CD1