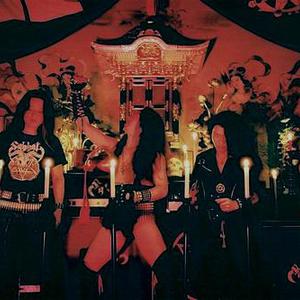 Two artists share this name: a British thrash metal band and a Japanese black/thrash metal. They are listed in order of prominence: 1) The British Sabbat is a thrash metal band formed out the ashes of two previous high-school bands, 'Hell' and 'Hydra', in May 1985, when vocalist Martin Walkyier and bassist Fraser Craske of Hydra ditched their guitarist (who wished to concentrate on a more melodic style of metal) and hooked up with guitarist Andy Sneap and drummer Simon Negus to form the first Sabbat line-up.

1) The British Sabbat is a thrash metal band formed out the ashes of two previous high-school bands, 'Hell' and 'Hydra', in May 1985, when vocalist Martin Walkyier and bassist Fraser Craske of Hydra ditched their guitarist (who wished to concentrate on a more melodic style of metal) and hooked up with guitarist Andy Sneap and drummer Simon Negus to form the first Sabbat line-up. After rehearsing for nearly a year they released the "Fragments of a Faith Forgotten" demo, which was very well received, with immediate interest from several record companies and a two-page spread in Kerrang! magazine. After releasing a Warhammer-inspired Flexi-disc on the front cover of White Dwarf magazine, the band penned a deal with German Noise Records in mid 1987 (signing had previously been delayed because Andy Sneap was under 18 years of age and not legally an adult). The band travelled to Hanover in September 1987 to record their debut album, "History Of A Time To Come". It was well received, as was the follow-up effort "Dreamweaver", however, tensions within the band began to mount, Some of the tensions related to Martin Walyier's folk music direction and Andy Sneap's long drawn out songwriting - 2 facts documented in terrorizer magazine,and Metal Hammer - However, the biggest pressure was simply financial - the band were broke, and completely unmanaged by their record label Noise.Simon Jones was first to leave in November 1989 during the Dreamweaver tour, Martin Walkyier left in 1990 along with Craske, with Walkyier going off to form Skyclad, with a group of others who shared his more folk orientated direction.

Though the band recorded one more album, "Mourning Has Broken", they could no longer regain the essential chemistry that had made them what they were, and they split up in the middle of a supporting tour.

Andy Sneap went on to form the group Godsend but is now best known as a producer.

Martin Walkyier tried to reform Sabbat in 2001 - however he was blocked from using the name Sabbat by Andy Sneap for legal reasons, Martin formed "Return to the Sabbat" with Simon Jones on guitar, Frazer Craske on bass and Steve Watson on drums. This line up eventually broke up in 2003 and Walkyier re-emerged with a new project, The Clan Destined initially formed with Iscariah of Immortal fame.

In 2006 Sabbat officially reformed and continue to tour with nearly their entire 1989 Dreamweaver line-up, with the sole exception being bassist Frazer Craske who has been replaced by Gizz Butt (English Dogs, Janus Stark, The Prodigy).

2) The Japanese Sabbat is a black/thrash metal band from Japan. It can be said that the story of Sabbat started in 1983 when a band called EVIL consisting of Gezol (bass), Ozny (guitar), Elizaveat (guitar), Valvin (drums) and Toshiya (vocals) was formed. Except for Ozny the rest of the guys had been playing together since 1981 in high school bands like ABURAMUSHI, HOT ROD and BLACK BEAST. With the high school bands the name of the game was mostly playing covers of NWOBHM acts like Iron Maiden and Demon but with EVIL the aims were immediately set higher. The band started to write material of their own and the first gig was played in August 1983.
Sabbat is still active. Released numerous ep's, splits, albums, live gigs etc.

For Satan And Sacrifice

Black Up Your Soul

Dreamweaver: Reflections Of Our Yesterdays (Remastered)

History Of A Time To Come

Fragments Of A Faith Forgotten