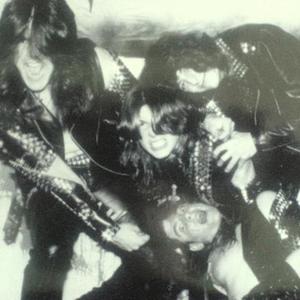 1) Possessed is an American death metal band and was formed in 1983 in San Francisco, California. After breaking up in 1993, the band reformed under original bassist/vocalist Jeff Becerra in 2007. They are noted for their fast playing style, Becerra's guttural vocals and have been cited as an influence on the death metal genre. The band's influence on the genre is so great that they are sometimes called the "godfathers" of the death metal genre and are often considered the first death metal group, with the name of the genre possibly coming from their first demo entitled "Death Metal".

The band originated in San Francisco in 1983. The band recruited Jeff Becerra to take over the lead vocal position following the death of original lead vocalist, Barry Fisk. The following years were spent practicing and working on their sound by performing at local venues. Through their early live performances they met fellow bay-area heavy metal band, Exodus. Exodus brought the band's four song demo recording to the attention of Brian Slagel, head of Metal Blade Records. lagel showed interest in the band and offered to put one of their songs on an upcoming compilation titled "Metal Massacre 6". The track included was titled "Swing of the Axe". Following the release of the compilation, guitarist Brian Montana left the band due to creative differences. He was replaced by Larry Lalonde, future guitarist of popular alternative rock band Primus. Although Metal Blade did not offer to sign the band, the compilation drew the attention of Combat Records. Possessed signed with the label and released the album "Seven Churches" in 1985.

Possessed followed the release with a supporting tour which included a performance with Slayer and Venom at San Francisco's Kabuki in 1986. On Halloween, 1986, Possessed released their second album, "Beyond the Gates". In 1987 the band issued a five song EP titled "The Eyes Of Horror" which marked a change in direction for the band. The Satanic themes that they had become noted for were completely absent on the EP. The songs had more of a thrash metal style than their earlier death metal. The EP was produced by guitarist Joe Satriani. Most of the songwriting was done by Lalonde, rather than Becerra and Torrao who had written most of the band's earlier material.

Shortly after the release of the Eyes of Horror EP the band disbanded. In 1989, Jeff Becerra was paralyzed from the waist down following a shooting incident.

In 2007, it was announced that Jeff Becerra would be performing under the "Possessed" name at the Wacken Open Air festival and would be backed by all members of Sadistic Intent, one of the bands featured on the Possessed tribute, and would also headline the Gathering of the Bestial Legions III festival in Los Angeles.

2) This is the story of a band whose tragic legacy could never have been predicted. Possessed were born out the thriving underground West Midlands Rock & Blues scene of the mid to late ?60's. This was a scene in which band- leader, Vernon Pereira, had been a key figure.

The band were formed in late 1969 when Vernon teamed up (after a spell playing next to Robert Plant in The Band Of Joy) with Mick Reeves, who had been playing in (amongst other bands) Sugarstack with Al Atkins. This was the band that would eventually evolve into being the first incarnation of Judas Priest.

Exploration was originally intended for releases in 1971. Due to various reasons the album never saw the light of day; that is, until a few years back, when Rise Above Records released it.

The band were finally on the verge of signing a major deal, when tragedy struck. Whilst returning home from a gig in 1976, the bands van drove into a stationary tanker, taking the lives of three band members.

The Eyes Of Horror