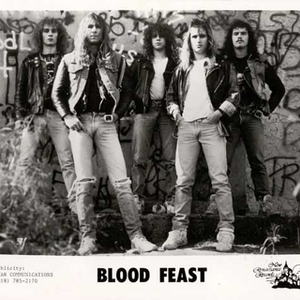 It all started back in 1985 when drummer Kevin Kuzma and bassist Louis Starita joined forces with vocalist Gary Markovitch and guitarist Adam Tranquilli under the band's original name, BLOOD LUST. BLOOD LUST's maiden studio effort surfaced in February of 1986 in the form of a four song demo tape entitled The Suicidal Missions. Later that month, the talents of Michael Basden were recruited for the band as a second guitar player.

In May of 1986 the band was approached by New Renaissance Records to appear on a pair of compilation albums, Thrash Metal Attack and Speed Metal Hell Volume 3, with two tracks lifted straight off the demo tape. Soon afterwards the band was forced to change their name, and so they did... now calling themselves BLOOD FEAST. In June of 1986, New Renaissance Records offered the band an album contract.

The band financed the budget for the recording of the first album themselves, and in February of 1987 the debut album from BLOOD FEAST entitled Kill For Pleasure became a reality. Even with an extremely rough production and very little promotion from the record company, the album quickly became New Renaissance's top selling release.

It was the band's musical talent, determination, and electrifying live performances (which always ended with a blazing cover of the Celtic Frost classic "Into Crypts of Rays") that gave them the recognition they deserved, not to mention their strong underground BUZZ and many favorable reviews in magazines and fanzines worldwide.

Realizing BLOOD FEAST's potential, New Renaissance immediately sent the band back into the studio to record a four song mini-LP. In December of 1987, Face Fate was released and almost immediately outsold the debut album.

In June of 1988, BLOOD FEAST found themselves back in the studio to record a ten song demo, this time as a quartet, as Adam Tranquili was asked to leave the band. This demo was titled The Last Remains, and it was recorded on 24 tracks and indicated a tremendous growth in the band's songwriting and musical skills. The music is still aggressive and powerful as ever, but the addition of sheer professionalism and finesse brought their music to new heights.

There were some minor changes in the production of the album, such as new cover artwork and a name change. The title became Chopping Block Blues and was recorded in the summer of 1989 and released in February of 1990. Chopping Block Blues marked the band's greatest songwriting achievement, and is a concrete indication of their true potential and unique style, but unfortunately, became the band's last recording, as they broke up soon after it's release.

After being disbanded for over 10 years, the band got back together for a one time only gig at the March Metal Meltdown in Asbury Park, New Jersey in 1999!! When they hit the stage, they took everyone back to 1987, because it seemed like you were seeing them in their prime!! They came out with all the raw intensity that the live show has to offer, even after all the years of being apart. A KILLER setlist of songs, played as tight as if they never broke up was offered up to the fans. It's safe to say, NO ONE left disappointed!!

Kevin Kuzma and Adan Tranquilli, the original drummer and original guitarist for Blood Feast REVIVED the name of Blood Feast in 2007 with members of Kuzma's band Annunaki serving in place of other original members, beginning with a gig at the Brooklyn Xecution Festival.

The Future State Of Wicked