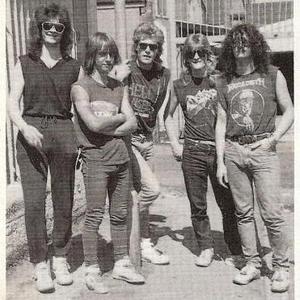 Hydra Vein was formed in the spring of 1987,when Deathwish bassist Damon Maddison left that band in order to record his own material. Recruiting his brother and likewise ex-Deathwish member Nathan on drums, together with singer Mike Keen, the trio recorded ?The Reptilliad? demo in July 1987, augmented by guitarists Dave Brunt (a.k.a. Dave Deathwish) and Alan Wheatley-Crowe. As both guitarists were involved with their own outfits at the time...

After a couple of months of rehearsals, February 1988 saw the band enter the Blue Box studios in Hove to record their first (and now much sought-after) album ?Rather Death Than False Of Faith?, which finally saw the light of day in November that year (the release was delayed when major retailer WH Smith/Our Price initially refused to handle it on the dubious ? possibly spurious ? grounds that the record's title might cause offense in the wake of the Eniskillen outrage).

The album generated hugely positive reviews in the metal press and, helped by exposure on Tommy Vance's Friday Rock Show on BBC Radio One, started to pick up healthy domestic sales, which in turn brought it to the attention of Peter Mensch's Three Cherries outfit in the US. Three Cherries were poised to release the album stateside when Mensch ran into well-publicized problems of his own, which then led to a fatal delay in the US release. ?Rather Death ?? was eventually picked up by Borivoj Krgin's Mean Machine label but crucial impetus had been lost and the band were never to get close to the same level of exposure again. Back in the UK, the band gigged where and when they could, play Hydra Vein 1989ing local headline gigs and supporting the likes of Sodom and Toranaga further a field. However, frustration was beginning to take its toll on the personalities in the band and after one particularly eventful gig, headlining Brighton's Level festival where a minor riot kicked off during the group's set, Ranger left the band to pursue his own interests. The remaining members continued as a four-piece for a while until another series of Spinal Tap-esque incidents on the road, this time on the way to supporting Candlemass in Bradford, saw them decide to split from Metalother and also to part company ? rather more amicably ? with Davis.

The world, though, had not forgotten Hydra Vein and within a matter of a couple of weeks, RKT Records were on the line with an offer of another one-album deal, which the band (such as it was) jumped at. Adverts were again placed in the ?musicians wanted? section of the music papers' classifieds with Dorset boys Paul Bate and Jon Balfour eventually being given the nod. They would provide the guitars for Hydra Vein's second album, ?After The Dream?, which was recorded at Square Dance studios in Derby in September 1989 and released a couple of months later.

Although technically superior in virtually every department to its successor and again drawing critical praise from reviewers, ?After The Dream? never generated the same level of excitement to the band's debut and, in fact, doesn't really convey the same level of energy on vinyl as ?Rather Death ??. It was, in effect, the last throw of the dice from a band that was close to running its course and, within a year of its release, Hydra Vein had disbanded.

As of 2007 the band managed to secure a re-release of both albums on CD. Remaining band members Damon,Nathan,Paul,Stephen and Dan work and live all over Europe. There are no plans as yet, to tour or record any more material. Especially since the recent death of Mike.

Rather Death Than False Of Faith