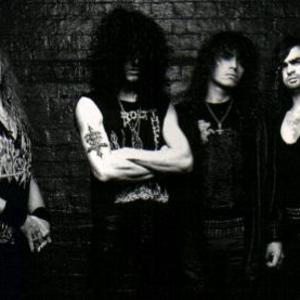 Morbid Angel is a Tampa, Florida, United States-based death metal band assembled in 1984. They, along with Deicide, Death, Possessed, Autopsy, Suffocation, Obituary, Massacre and a handful of others were crucial in the development of the death metal genre and its standards. Their songs are complex in arrangement, owing to the considerable technical skills of both guitarist Trey Azagthoth and drummer Pete Sandoval (who also played in the grindcore/death metal band Terrorizer).

Morbid Angel made their vinyl debut in 1987 on New Renaissance Records. Morbid Angel was one of the original death metal bands signed to Earache Records, and was also influential in the transition of death metal from its thrash metal roots to its current form by adding guttural vocals, up-tempo blast beats, incorporating atonality in guitar soloing, and dark, chunky, mid paced rhythms. It was also the first death metal band to have a touch of mainstream success, such as being signed to Giant Records in 1992 and having the music video for the song "God of Emptiness" shown on an episode of Beavis and Butthead.

The original lyrical themes focused mostly on Satanism, paganism and anti-Christian subject matter, but from the second album, Blessed Are The Sick onward, the lyrics slowly moved toward the ancient Sumerian gods, though much of this is a nod to the Simon Necronomicon, which was influenced by Sumerian mythology as well as the author H. P. Lovecraft, as well as a fascination with the Roman Empire, though "anti-christian" elements continue to permeate the lyrics. Their albums are notable for being released in alphabetical order (their first album starts with the letter A, the second with B, etc.). Guitarist Trey Azagthoth has said in an interview that it was at first a coincidence with the first albums.

In 2008 appearance on some of the mid-summer 2008 European festivals was announced as a "short break from writing and pre-production of their new". After 3 years Morbid Angel released their expected 8th album Illud Divinum Insanus in June 2011. The album includes industrial and nu-metal elements. Also former Hate Eternal drummer Tim Yeung recorded the drum tracks for this album. The album was not well received by a big part of the fans, who liked the band's older and more purely Death Metal sounding albums.
But there were also fans who accepted and embraced Illud Divinum Insanus.

Formulas Fatal to the Flesh