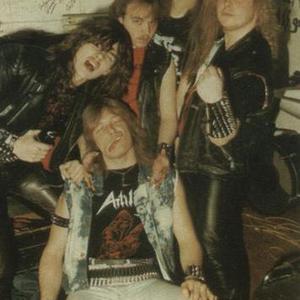 Artillery is a Danish thrash metal band. They participated in the early development of the genre, and their highly energetic, riff-centric and often fast-paced music is similar in style to that of Slayer and Megadeth from the same era. The band formed in 1982 in Taastrup, a suburb to Copenhagen. The members were guitarists J?rgen Sandau and Michael St?tzer, bassist Morten St?tzer, drummer Carsten Nielsen and singer Carsten Lohmann. The group recorded the demos Shellshock and Deeds of Darkness in 1984.

The band formed in 1982 in Taastrup, a suburb to Copenhagen. The members were guitarists J?rgen Sandau and Michael St?tzer, bassist Morten St?tzer, drummer Carsten Nielsen and singer Carsten Lohmann. The group recorded the demos Shellshock and Deeds of Darkness in 1984.

Artillery's first commercial debut came in early 1985 with the inclusion of the song "Hey Woman," on Volume One of the "Speed Metal Hell" compilation series which was released on New Renaissance Records. Later that year, Carsten Lohmann left and was replaced by Flemming R?nsdorf. Later the same year, Artillery recorded a third demo, Fear of Tomorrow, signed with Neat Records, and released their first album, also titled Fear of Tomorrow. In 1986, Carsten Nielsen was contacted by Quorthon of Bathory asking him if he was interested in drumming for Bathory. Nielsen turned down the offer since he thought Artillery would become a much bigger band than Bathory. Their second album, Terror Squad, was released in 1987.

Guitarist J?rgen Sandau left the band in 1989. Bassist Morten St?tzer took over his position, lending the bass to recruit Peter Thorslund. Their third album, By Inheritance, was released in 1990 on both LP and CD, by Roadrunner Records. Artillery disbanded in 1991, some of the members pursuing musical projects of their own during the rest of the 1990s.

Following the 1998 release of an Artillery compilation CD, "Deadly Relics" by Mighty Music, featuring a mix of old demo recordings and two songs from the 1989 promotional tape, the band reformed to record a fourth album, B.A.C.K., which was released in 1999 by Die Hard Music.

In 2007, the band released a limited edition 4-CD boxset entitled "Through the Years", which contains the band's four studio albums and all their demo material.

On November 6, 2007, Michael St?tzer confirmed on the official Artillery website that they were once again active, have concerts booked, and are rehearsing their old songs (along with new material). A new studio album is in consideration. However, longtime Artillery singer Flemming R?nsdorf is not involved, and the band is auditioning new singers.

On November 27, It was confirmed through the website and through the official newsletter, that singer S?ren Adamsen will be the new frontman.

The official Artillery website was updated recently, stating that Artillery would tour around various locations in Europe during 2008, and recorded a live DVD during the MetalMania Festival in Katowice, Poland in 2008.

The Face Of Fear

One Foot In The Grave, The Other One In The Trash