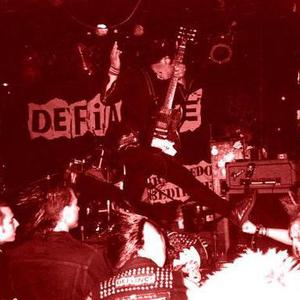 There are 2 bands with the name Defiance: (1) Defiance is a thrash metal band from Oakland, California. While virtually unknown to mainstream metal and rock circles, Defiance is known as one of the classic second-tier thrash bands to come from the Bay Area thrash metal scene. They played a decidedly technical style of thrash originally evoking bands like Testament, though they would later move on to playing in their own unique, more progressive thrash style. They reformed in 2005 and have since release an album entitled The Prophecy in late 2009.

(1) Defiance is a thrash metal band from Oakland, California. While virtually unknown to mainstream metal and rock circles, Defiance is known as one of the classic second-tier thrash bands to come from the Bay Area thrash metal scene.[citation needed] They played a decidedly technical style of thrash originally evoking bands like Testament, though they would later move on to playing in their own unique, more progressive thrash style. They reformed in 2005 and have since release an album entitled The Prophecy in late 2009.

Defiance was formed in 1985 by guitarist Brad Bowers, drummer Matt Vander Ende, and Bassist Mike Kaufmann. Doug Harrington joined later but left the band not long after due to conflicts with Bowers, and was replaced by Jim Adams. Eventually the band ousted Bowers and replaced him with Harrington. In 1987 the band recruited a vocalist in Mitch Mayes.

Now with a stable and complete lineup, Defiance began playing shows in the Bay Area. With the local thrash scene gaining momentum, the band attained local notoriety. Their first demo was released in 1987. Shortly afterwards Mayes left the band and was replaced by Ken Elkington. With Elkington the band issued their Hypothermia demo in 1988. This demo caught the attention of the independent metal label Roadracer Records, who signed the band that year. At Roadracer's insistence, the band traveled to Vancouver, Canada to record their debut album with Annihilator guitairst Jeff Waters.

The bands debut, Product of Society was released in 1989. The band was very much unsatisfied with Water's production job, as he told the band to turn down the volume pots on their guitars, resulting in a very thin riff sound, and the members also claim Waters was acting unprofessionally during the recording. Nonetheless the album managed to attract attention in the thrash community despite the frequent label as a Testament knock-off. After playing a few dates in the Bay Area, Elkington was fired due to lack of commitment and former Laughing Dead vocalist Steev Esquivel was added to the group and finished the bands tours for the album.

With Esquivel on board, Defiance released their second album, Void Terra Firma in 1990. Produced by John Cuniberti (best known for producing Joe Satriani's Surfing With the Alien), the production was slightly better but still a bit sketchy. The bands overall sound became a little more progressive but stuck to the Bay Area thrash ideals, though many compared Esquivel's singing style to Chuck Billy of Testament. This was the bands biggest commercial success, featuring a metal hit in its cover of Iron Maiden's "Killers". The band toured with Vio-Lence in support of the album that year.
The band went into the studio with Rob Beaton to record their 3rd album in 1990, but problems arose when Steev Esquivel's drug addictions became over the top and he left the group. He was briefly replaced my former Militia vocalist Matt Ulrickson, but the band was dissatisfied with the results and fired him. The now cleaner Esquivel returned to the band, but this led to the delay of the recording of the album.
Defiance's third release Beyond Recognition was finally released in 1992. Straying away from the bands original thrash trappings, the band explores extremely technical songs with odd time signatures and off the wall song structures, even experimenting with jazz fusion elements, but while remaining true to the thrash metal formula. This coupled with the much improved production made for it to be considered Defiance's best work by many fans. It was by far the bands most critically acclaimed album, but due to a lack of support from Roadracer and a shifting musical atmosphere, it suffered in sales especially in America (though sales in Europe and Japan were still substantial).

Around this time Roadracer began to apparently treat the band poorly. The band was denied a tour of Europe with Sepultura, where the band still had a substantial audience. Jim Adams and Matt Vander Ende left the band after the albums tentative single, "Inside Looking Out" (featuring guest vocals from Dave White of Heathen), was denied single or video release. They were replaced by Brian Wenzel and Mike Bennet respectively. Matt Vander Ende briefly joined Laaz Rocket, and later in 2004 he moved to New York City to become the drummer for the Broadway show Wicked. Jim Adams returned to the band shortly after he left and Mike Bennet was replaced by Tyson Leeper. The band did a short American tour, with Leeper leaving and being replaced by Paul Palmer in the process.

In 1993 Steev Esquivel left the band and was replaced by vocalist Dave White. In late 1993 with Dave and Paul in the lineup, Defiance wrote and recorded new material including "Safe" (Kaufmann, Harrington, White), "Don't Play God" (Harrington, Palmer, White) "Wasting Creation" (Harrington, White, Adams, Palmer), songs which were recorded and mastered with this lineup in 1994 by producer/engineer Rob Beaton ("Beyond Recognition" album). Several supporting performances ensued including a co-headline appearance at a large festival in Santa Barbara (Spring 1994). Although he played drums through the show, Palmer experienced a serious ankle injury when approaching the stage immediately prior. Due to surgery he was incapacitated for several months thereafter, ultimately retiring the drummer from the band. White, Harrington, Adams, and Kaufmann and new drummer then created the groove metal band Inner Threshold, which later evolved into Under. Meanwhile Steev Esquivel achieved considerable success in the late 90's with the groove metal group Skinlab.

In 2005 after over a decade since their disbandment, Defiance reunited with Esquivel, Harrington, Adams, and Kaufmann along with new drummer James Raymond. This incarnation of the band began working on new material, now signed to Metal Mind Productions. Metal Mind reissued all 3 of the bands LPs via the Insomnia box-set 2006. James Raymond departed the band and was replaced by former Vio-Lence drummer Mark Hernandez.

In November 2006 tragedy struck Defiance when guitarist Doug Harrington died of cancer, which he had been battling secretly for years. However, the band has continued and are working on a new release due late 2008. The bands new album does feature guitar work from Harrington, and it is unknown if Defiance will hire a replacement guitarist. It is said to be true to the bands thrash roots, but with progressive touches similar to their final offering Beyond Recognition.

A new song titled "The Voice" was posted on the band's myspace page. The lineup was Esquivel on vocals, Adams on guitar, Kaufmann on bass, and Hernandez on drums.
Late 2008 signaled some activity within the band as Defiance announced on its myspace page and website it hadsigned with Candlelight Records to release its new album. As of mid 2009, the recording of the album (titled "The Prophecy") was completed and given a release date of October 19, 2009.
Following the release, Esquivel once again quit the band, claiming he only intended to record some material with Defiance because that was what Doug Harrington had wanted him to do before he died. The band now has a new singer Keven Albert and a new guitarist Shawn Bozarth.[1]
After trying out different drummers for the new line up,, Defiance recruited Burton Ortega ex-member of KAOS to support the new album "The Prophecy".


(2) There also exists an anarcho street punk band Defiance from Portland, Oregon formed in 1993. Their discography includes five E.P.s, four full-lengths, and one album of out of print and rare songs. They have been sited as major influences on bands such as Anti-Flag and The Unseen.
they dont have influence on those bands at all actually since they have a song talking shit on rancid and green day who sold out just like these two bands did

The Very Best of Defiance

No Future No Hope (Vinyl)