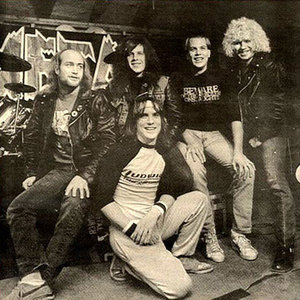 Metal Church was an American heavy metal band from Aberdeen, Washington, USA. They were formed as Shrapnel in 1980 at the San Fransisco Bay Area by band leader guitarist Kurdt Vanderhoof. Initially playing an abrasive and fast rendition of the NWOBHM sound, they released a few demos which sounded not too dissimilar to what Metallica will later popularize as thrash metal (Lars Ulrich even played several rehearsals with Metal Church before he joined Metallica, but was never a real member of the band).

However, nothing came out except for a few demos (which in hindsight were groundbreaking material at the time).

Kurdt dissolved the band and moved to Washington, where he found a lineup that would record the first few Metal Church albums. Along with the move from the Bay Area, the band's sound also changed to a more melodic, power metal sound, although retaining many thrash elements. Their first album was released in 1984 and the band's most recent work, 'This Present Wasteland,' was released in 2008. Metal Church was formed when the Thrash/Speed Metal Genre was still evolving. Most of their early work had a special trademark that resembled many of the European Black and Death Metal bands of the 1980's. The songs in their most successful albums, Metal Church and The Dark, proved to be thoroughly worked albums. David Wayne's vocals resembled those of the growls used by the European black metal bands but in a very high pitched tone. The lyrics from the album The Dark talk about death, assassination, and fears.

Damned If You Do