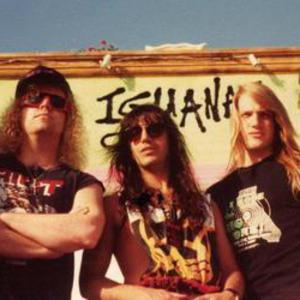 There are 3 bands named Riot. 1. Riot sprang from the basement of Mark Reale's home in Brooklyn, NY in the summer of 1976. In 1977 they had recorded and released their first album "Rock City" for New York's Firesign Records. Able to to obtain various licensing deals throughout the world, "Rock City" quickly found an audience. Capitol Records quickly signed Riot, who soon entered the studio to record their second album "Narita" which would be released in 1979. It was in 1981, however, that Riot released what is considered by most fans to be the band's most definitive album "Fire Down Under".

1. Riot sprang from the basement of Mark Reale's home in Brooklyn, NY in the summer of 1976. In 1977 they had recorded and released their first album "Rock City" for New York's Firesign Records. Able to to obtain various licensing deals throughout the world, "Rock City" quickly found an audience. Capitol Records quickly signed Riot, who soon entered the studio to record their second album "Narita" which would be released in 1979. It was in 1981, however, that Riot released what is considered by most fans to be the band's most definitive album "Fire Down Under".

Riot began when Kon-Tiki members Mark Reale (guitar) and Peter Bitelli (drums) recruited Phil Fiet (bass) and Guy Speranza (vocals) and recorded a four-track demo which they hoped would be included in a proposed compilation of new rock bands. While waiting for the project to get off the ground they added Steve Costello on keyboards.

Reale took the various demos to New York based producer Steve Loeb, who also owned Greene Street Recording Studio and the independent label Fire-Sign Records. Loeb turned down the compilation proposal but signed Riot. The band added second guitarist Louie Kouvais, replaced Fiet with Jimmy Iommi and recorded its debut album, Rock City. After a promising start and support slots with AC/DC and Molly Hatchet, the band were unable to maintain momentum, and were on the verge of breaking up for good by 1979.

In that year however, the New Wave Of British Heavy Metal took off, and the band came to the attention of Neal Kay who spread the word about them in Britain. British fans bought imported copies of Rock City which was recorded and produced by Steve Loeb and released on Loeb's Fire Sign Records. Encouraged, Loeb recorded the band's new album Narita. In the course of recording, Kouvaris was replaced by band roadie Rick Ventura.

Subsequent to a successful support of Sammy Hagar on his US Texas tour Capitol Records offered Riot a worldwide deal for Narita, mostly to support Hagar. Capitol and Hagar needed a harder, younger edge to associate with him, so Riot was chosen if they agreed to support Hagar on his UK tour. Hagar and Riot had a successful tour, but Riot was dropped by Capitol as soon as they were finished promoting Hagar.

Riot's management, Billy Arnell, Ezra Cook and producer Steve Loeb spent their last dollars remaining from the Capitol advance retaining important indie FM radio promotions to promote the Riot album. They put it on as many radio stations around the country as possible, thus raising the radio profile enough to where Capitol picked up their option for another record. And thus began Riot's biggest selling album titled Fire Down Under.

When the record was completed some months later, Capitol turned the record down calling it "commercially unacceptable" which put the band in contractual limbo. Capitol also refused to let the band out of the contract and insisted if the band wanted off Capitol, they would have to sue. A campaign was organized and financed by producer Steve Loeb and managers Ezra Cook and Billy Arnell with fans around the world, but especially in the UK where the fans picketed the offices of EMI Records. Finally Elektra Records worked things out with Capitol's Rupert Perry and signed Riot and immediately released Fire Down Under which then soared into the Billboard Top 100 chart.

Singer Guy Speranza had difficulty melding his religious convictions with his role in the band and was replaced by Rhett Forrester (b. 22 September 1956 ? d. 22 January 1994) for the next album, Restless Breed (1983). Though a striking frontman, any hope of a major breakthrough was sunk by a combination of Forrester's erratic behaviour on the road and a changing of the guard at Elektra. The next album, Born in America, (1984) was self- financed by Steve Loeb and was released on Quality Records, an independent Canadian label. Support melted away, leading to the band's disintegration.

After stints with his own band (Narita) and abortive reformations of Riot, Reale mended fences with producer Steve Loeb in New York. He kept Don Van Stavern from Narita on bass, recruited Bobby Jarzombek (1988 - 1999) on drums and Greene Street Studio Manager Dave Harrington brought in Tony Moore for vocals. A resurrected Riot was born. Loeb cut a four track demo at his Greene Street Studio in Soho NY and along with real estate maven turned rock manager Vince Perazzo brought the band to CBS Associated, who offered the band a worldwide deal. Resultant albums Thundersteel (1988) and Privilege of Power (1990) renewed fan interest around the world, particularly in Japan, where they maintained their strongest subsequent following.

The revived band was from then on dogged by continual personnel and record company changes. But, by virtue of Loeb's willingness to self finance every record that followed until his departure from the production chair in 1995, Riot was able to continue making records. All told, Loeb produced or co-produced 13 Riot albums in his 19 year association with Mark Reale and the different configurations of Riot. Reale continued to steer the band into the turn of the century, releasing albums roughly every couple of years.

Rhett Forrester was shot dead during a robbery in Atlanta Georgia in 1994, and original vocalist Guy Speranza died of pancreatic cancer in 2003.

In 2008, the Thundersteel-era line-up of the band (with the addition of second guitarist Mike Flyntz) reunited for a tour starting in June 2009 with shows at the Sweden Rock and Metalway festivals and a new studio album.