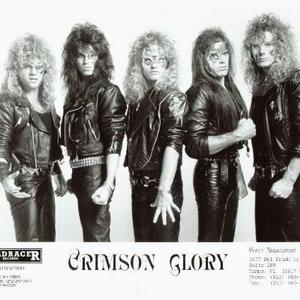 Progressive metal band Crimson Glory began life in Sarasota, Florida in 1982 under the moniker 'Beowulf'. They rehearsed diligently, finding and developing their sound for almost four years before recording their self-titled debut album on Par Records in 1986. Tight harmonies and soaring vocals would feature prominently on this release, and the album included the haunting track, ?Lost Reflection?.

In an era of sound and look-alike metal bands, Crimson Glory wished to have themselves be immediately identifiable from the rest, so they wore full-face metallic silver masks on-stage (and for all photo shoots and public appearances as well). Quite obviously, the mystically-named vocalist Midnight was the exception to this, as his mask left his mouth uncovered.

Their second release, ?Transcendence? was a landmark and it garnered them much-deserved praise and attention, both at home and abroad. They had also discovered how hot the masks would be, so to keep the mystique, they cut them down into a ?Phantom of the Opera? style. (After the tour, the masks would be retired.)

After this album's release, they performed at the 1989 Tampa Bay Music Awards and walked away with three awards that night ? Most Outstanding Male Vocalist, Most Outstanding Local Release and Most Outstanding Metal Band (beating out the almighty Savatage for this one). It was after this tour that drummer Dana Burnell and guitarist Ben Jackson left the group. Together, they would go on to form the group Parish, who released their first and only album, ?Envision? in 1995, after which, the band dissolved.

Dana would be replaced by Ravi Jahkotia, who brought a more ?tribal? feel to the band and the new material they would write was based more on drum grooves as opposed to guitar riffs, which their first two albums were largely based on. It signified a bold and definite shift away from the metal sound the band had built their reputation on and it was at this time the band continued on as a four-piece.

They were signed to Atlantic Records and released their third album, ?Strange and Beautiful?. Prior to the start of the tour, vocalist Midnight departed as well, dropping into a self-imposed exile for almost a decade before anyone heard from him again. Guitarist Jon Drenning would move the band to Arizona and regroup the band twice, first as ?Crush', and then as 'Erotic Liquid Culture'. They would release one album under each name. Both albums are out of print and much sought-after by long-time fans. Moving back in Florida, and after an almost five year hiatus, Jon Drenning regrouped Crimson Glory. He welcomed Ben Jackson back into the band and found a replacement for Midnight in the form of Wade Black. This incarnation of the group would release ?Astronomica? and following a brief tour, would go on hiatus again. Ben Jackson and Midnight have since busied themselves with solo careers in the interim.

Answering the demand of the fan base, affectionately referred to by the band as the ?Crimson Militia', Drenning reunited all the original members: vocalist Midnight, guitarist Ben Jackson, bassist Jeff Lords and after much secrecy and to the delight of the fans, drummer Dana Burnell. A surprising addition has been the inclusion of former Astronomica tour drummer Jesse Rojas, now backing up the group in live performances on percussion and some lead vocal work. The band signed with Black Lotus Records for a new DVD of the 1989 Bradenton concert, as well as a re-release of the two first albums. (Black Lotus Records has since gone under and the material was never released.) Sadly, the reunion was not to last. In late January 2007, citing personal differences, Crimson Glory once more parted ways with singer Midnight. After Midnight's dismissal, former vocalist Wade Black was brought back into the fold, but the band has since only played three shows. Following Black Lotus' bankruptcy, they quietly went on indefinite hiatus, with Jon Drenning's decision to return to school to pursue a career in Nuclear Medicine having some bearing on this.

In hospital with family, friends and bandmates by his side, former singer Midnight died from kidney and liver failure at 3:30am on July 8, 2009.[4] In light of the passing of Midnight, the band has decided to come together once more and will play at least two shows - the first in tribute to Midnight, headlining this year's ProgPower in Atlanta, Georgia with many special guest vocalists, and following this show, the band will embark on the inaugural Triton Power Cruise from Miami, Florida to the Bahamas in April 2010.

On May 2010 the band announced that a new singer had joined the band. His name is Todd La Torre. La Torre made his first (and as yet only) public appearance with Crimson Glory at ProgPower USA X as one of seventeen guest performers (including Wade Black, vocalist on the Astronomica album and subsequent European tour, and David Van Landing, who replaced Midnight briefly for the Strange and Beautiful US tour) paying tribute to Midnight, the band's original singer. Midnight passed away late last year due to long-term health complications. Essentially unknown to the mainstream progressive metal scene, La Torre spent 22 years earning his stripes and solidifying himself as an unquestionable talent behind the drum kit of various hard rock and heavy metal projects in the Tampa Bay Florida area; however his vocal aspirations went largely unfulfilled until last year, when Matt LaPorte (JON OLIVA'S PAIN), who had only heard La Torre sing on a few occasions, casually mentioned to Drenning that he might make a nice addition to the already stellar lineup of performers the band had accumulated. It was only a short time later that La Torre found himself at the band's rehearsal studio, and the pieces began to fall into place.

The Last Night In Japan

War Of The Worlds (EP)