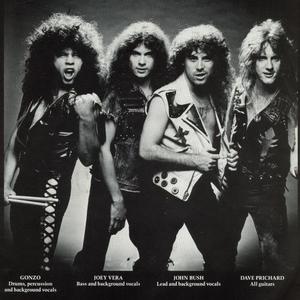 Armored Saint is a heavy metal band originating from Los Angeles, California. Armored Saint was formed in 1982 by brothers Phil and Gonzo Sandoval, and guitarist David Prichard, while attending Woodrow Wilson High School. Next to join were singer John Bush and bassist Joey Vera. Gonzo Sandoval came up with the name after getting stoned with the other band members and seeing the film "Excalibur" at a theater in Monterey Park.

Armored Saint was formed in 1982 by brothers Phil and Gonzo Sandoval, and guitarist David Prichard, while attending Woodrow Wilson High School. Next to join were singer John Bush and bassist Joey Vera. Gonzo Sandoval came up with the name after getting stoned with the other band members and seeing the film "Excalibur" at a theater in Monterey Park. Armored Saint recorded a five song demo that landed the song "Lesson Well Learned" on the compilation album "Metal Massacre II". Three of these demo songs were then used for the band's self-titled EP on Metal Blade Records in 1983. The group then signed with Chrysalis Records in 1984.

Armored Saint released their debut album "March of the Saint" in 1984 followed by 1985's "Delirious Nomad". The debut album yielded a minor MTV hit with "Can U Deliver?". After the release of "Delirious Nomad", Phil Sandoval left the group. Their third album, "Raising Fear", was recorded by the remaining four members. Unhappy with their lack of success on the Chrysalis label, Armored Saint returned to Metal Blade in 1989. Soon after the release of their first live album "Saints Will Conquer". Later that same year the band added Texas drummer Eddie Livingston, and Jeff Duncan formerly of the L.A. club band Odin as second guitarist.

While writing and recording rough four-track demos for their next studio album, Dave Prichard was diagnosed with leukemia. Prichard succumbed to the disease before recording sessions for "Symbol of Salvation" began. After a brief hiatus, Phil Sandoval returned to the band to replace Prichard. The following year, "Symbol of Salvation" was released to widespread critical success. It was dedicated to the spirit and memory of Dave Prichard, whose solo on the demo recording of the song "Tainted Past" was used on the album.

After Armored Saint disbanded, Joey Vera kept busy playing with such bands as Fates Warning, Lizzy Borden and Chroma Key. He released a solo album in 1994 and started a successful second career as a producer and engineer.

In 1999, with Anthrax on temporary hiatus, John Bush and Joey Vera decided to reform Armored Saint. The entire "Symbol Of Salvation" lineup returned to the studio and in 2000 the album "Revelation" was released. It included the band's first song with Spanish lyrics, "No Me Digas". A small club tour opened for Dio and Lynch Mob followed.

The following year, the band released "Nod To The Old School", a collection of rarities, demos and outtakes (many from the Prichard years), plus a few new tracks.Soon after, John Bush returned to the studio with Anthrax, and Armored Saint was on indefinite hiatus.

in 2004, Joey Vera re-joined Bush in Anthrax on a temporary basis, replacing bassist Frank Bello. In early 2005, Anthrax's Scott Ian announced that their classic "Among The Living"-era lineup was reforming, leaving the membership of Bush and Vera in question. Bush stated his involvement with Anthrax was over, and Dan Nelson took over vocal duties in the band in 2007. This move gave new hope to many that Armored Saint would soon again record. A one-off show with the "Revelation" lineup took place in 2005 and in 2006 the band embarked on a new tour.

As part of their 20th anniversary, Metal Blade Records released a special edition of "Symbol Of Salvation". Also reissued was the band's long out of print live video, "A Trip Thru Red Times".

In Fall 2009, the band returned to the studio to record a new album called "La Raza" which was released in March 2010.