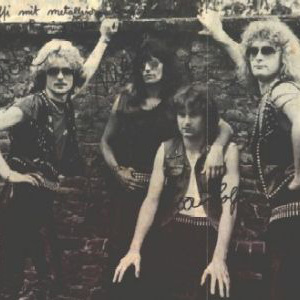 Running Wild is one band from a wave of German Heavy metal bands to emerge in the early/mid 1980s (along with Helloween, Rage, Blind Guardian, Grave Digger, etc). The music they play is a mixture of heavy and speed metal. The band has carved its niche in the metal world as the first "pirate metal" band, a theme which took off with the release of Under Jolly Roger in 1987. The band played their farewell show at the Wacken Open Air 2009, for which setlist fans voted for. In October 2011 Rolf officially announced the comeback including a new studio album called "Shadowmaker" due in April 2012.

Around 1979 the band was renamed as Running Wild and in 1983 they released their first demo-tape with the following line-up: Rock'n'Rolf (lead vocals, guitar), Uwe Bendig (guitar), Matthias Kaufmann (bass) and Hasche (drums).

Running Wild astonished their hometown Hamburg, Germany with heavy speed Metal and a flashy leather image, so that finally the songs Iron Heads and Bones to Ashes were published on the Death Metal compilation by NOISE in 1984. Under the same label their debut album Gates to Purgatory was released in the same year and sold not less than 20.000 units in the first three months. The record climbed the german metal-charts and with the 12" maxi Victim of States Power there was a nice little metal goodie thrown onto the market. The legendary(although the second) line-up - read as Rock'n'Rolf (lead vocals, guitar), Preacher (guitar, vocals), Stephan (bass) and Hasche (drums).

From the release of their second album Branded and Exiled in 1985 Running Wild was one of the most popular metal acts in Germany. In that year the band was spoken about in the same breath as the Scorpions and Accept. After their second release the band did gigs with Sinner in German venues. Guitarman Preacher was subsequently replaced by Majk Moti. Meanwhile the typical Running Wild style was found. One year later sensational news spread fast: for the first time an independent band, Running Wild, was to tour with the American "superstars" M?tley Cr?e on their Theatre of Pain - tour.

In 1987 Under Jolly Roger was released when Running Wild launched their individual bizarre pirate image and hoisted the Jolly Roger for the first time. In this year another change in the line-up was made. Drummer Hasche and bassman Stephan were leaving the ship. They were replaced by Stefan Schwarzmann and Jens Becker. In the wake of their first European tour they sailed up to Budapest where they played a famous gig in front of 5.000 fans. The material taken from that tour was released as the live album ?Ready for Boarding? a year after. International critics were unanimously positive. Furthermore this record was used to draw the final line under their management so far.

At the end of 1988 their fourth studio album was released. Port Royal sold over 50.000 times. At that time the band could look upon a wide fanbase and presented a steady influence in Heavy Metal. Nevertheless Stefan Schwarzmann left the band for U.D.O. and put the sticks in the hands of Iain Finlay.

In 1989 the new studio album Death or Glory was released which spent several weeks in the European charts. A short time after the maxi-single Bad to the Bone entered the shops.

The Death or Glory tour 1990 was an outstanding success with nearly all concerts sold out. Parallel to the tour the mini-LP Wild Animal showed up. The steady carousel in Running Wild's line-up turned again. Iain Finlay left the pirates and J?rg Michael appeared as a temporary drummer. As new members of the band drum-roadie AC and axeman Axel Morgan replacing Majk Moti were confirmed.

In 1991 Rock'n'Rolf and his crewmen struck once again and released first the maxi-single Little Big Horn (No. 34 in the single charts) then the album Blazon Stone and shortly after the "Best Of" compilation The first Years of Piracy. A successful tour with Raven and Crossroads underlined the status of Running Wild at that time.

The next studio album ?Pile of Skulls? was released in 1992 and dealt lyrically with corruption and disguise and sported the new bassman Thomas Smuszynski for the first time. Also on board was the returner Stefan Schwarzmann. A single from that album ?Lead or Gold? was released. The following year the ?Pile of Skulls? tour was rolling in which the band shone with a monumental stage and devastating pyro-technics.

In 1994 first the single ?The Privateer? and then the album ?Black Hand Inn? were released. On that record the new wizard on the guitar Thilo Herrmann (Ex-Risk) was presented. J?rg Michael instead was now a steady member in that crew.

The ?Summer Metal Meetings? 1995 were becoming a brilliant success under the flag of Running Wild and bands like Rage, Grave Digger and Iced Earth. In the end of October another cannon-blow was fired with the new album ?Masquerade?. That new album once again showed that german Metal was where the gold was lying. On the related tour in 1996 the band celebrated sailing the wild seas of Metal again and took a deserved rest after.

After a creative rest with the same line-up and with a fresh blow in the sails ?The Rivalry?, for the first time released under the custody of GUN, was released in early 1998. This record was more compact and more melodic than ever brought to life by the rough voice of Rolf Kasparek and the nearly unbelievable guitar power being played by Kasparek and Herrmann. With ?The Rivalry? Running Wild once again raised the flag of true Heavy Metal. Unfortunately J?rg Michael left the band in spring even before the ?The Rivalry? - tour to concentrate on his work with Stratovarius. As a replacement Christos Efthimiadis (Ex-Rage, Sub7even) had to fill the gap for the tour, on which he really showed his knowledge of the pirate material.

At the beginning of 2000 ?Victory?, the eleventh studio album from this Hamburg institution was published. Running Wild head Rolf Kasparek aka Rock'n'Rolf likes to think of the last two albums ?Masquerade?, ?The Rivalry? and the new album ?Victory? as a trilogy consisting of (obviously) three loose concept albums. The reason why they are loose concept albums is that there is a leitmotif running through each of them but the songs of all three albums can definitely stand on their own feet. They are about the battle between light and darkness. ?Masquerade? marked the beginning of this trilogy, the subject matter of ?The Rivalry? was the argument, and ?Victory? marks the end: the decisive battle. With the title song, the trilogy finds its climax and its end.

At the end of February 2002 Running Wild returned with their twelfth studio-album ?The Brotherhood? and a new line-up: Rock'n'Rolf (vocals, guitar), Peter Pichl (bass), Bernd Aufermann (guitar) and Matthias Liebetruth (drums). The material taken from that tour was finally released as a live album on 2-CD and DVD.

In 2003 the band celebrated its legendary 20th anniversary with a spectacular gig at WACKEN OPEN AIR and NOISE released a 2-CD ?20 Years in History? containing two as yet unreleased tracks.

At the beginning of 2005 ?Rogues En Vogue?, the thirteenth and last studio album for GUN, was released. As a crowning ending of the same year REMEDY RECORDS published the first tribute album ?The Revivalry - A Tribute To Running Wild?.

2006 GUN releases ?Best Of Adrian?, a compilation with 15 remastered songs of the last 9 years.

The Pirates are back!
German power metallers RUNNING WILD have reformed and will release their new album, "Shadowmaker", in April 2012 via SPV/Steamhammer.

Pieces Of Eight - The Privateer CD5

Pieces Of Eight - Bad To The Bone CD3