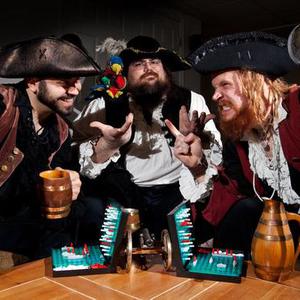 Forged upon the seven seas, we Swashbuckle hath come to take the metal community by storm. We've faced rumrunners of the Caribbean to bring you the most brutal in YAR face metal upon the Spanish Main. If ye be double crossin' us, we'll make ye walk the plank ye scurvy dogs! Yarrr! Swab the poop deck, and set sail for the Pirate Metal experience of your lifetime ye hornswogglers! Cheers! Readers beware, there be many horrors of the high seas, but none so wretched as SWASHBUCKLE.

Readers beware, there be many horrors of the high seas, but none so wretched as SWASHBUCKLE. Their tale began in the early year of 2005, as Commodore RedRum and Admiral Nobeard ventured off on a quest to pillage and plunder the All-You-Can-Eat Shrimp line at a Red Lobster along the coast of New Jersey, USA. Realizing their mutual love for all things piratical, thrash metal, and surf-n-turf, they commandeered a vessel and set sail to start what would be renowned as one of the fastest, heaviest and most outrageous metal bands to sail the seven seas. Thus, SWASHBUCKLE was born.

After completion of their first demo, they scoured the world for a seaworthy crew as vile as themselves. Venturing towards a group of uncharted islands, Captain Crashride was found drunk and marooned wielding a newly whittled set of drumsticks. Other than his desires for wenches and rum, Nobeard and RedRum found he was a bitchin' skin basher and could thrash alongside them in their quest for glory and high seas hi-jinks! With the forces of the pirates three combined, they raided, pillaged and plundered their local metal scene with tales of traitors, boozing, wenches, and thrashing lore.

Late 2005 saw the release of the "Yo-Ho Demo" which featured a more musically developed direction by the pirates. After extensive raiding and looting of the local scene, SWASHBUCKLE focused their blackened hearts on crafting a full-length metal masterpiece of unparalleled nautical proportions.

2006 saw the release of their debut album, "Crewed by the Damned" - well received by fans and critics alike. After numerous weekends and local shows, SWASHBUCKLE embarked on their first US tour in August of 2007, where they plundered and pilfered the East Coast and Midwest of the states like the band of bastards they set out to be.

The winds that filled the pirate's vicious sails carried word of the mighty thrashers to the ears of Rock the Nation management and into the capable hands of Kataklysm's frontman Maurizio Iacono and subsequently, Nuclear Blast Records who extended an accord to the humble pirates.

Inked in their own blood, Admiral Nobeard, Commodore RedRum, and Captain Crashride declared no quarter and no mercy unto the unsuspecting metal community that awaited their dastardly deeds and malicious moshing mayhem!

2009 saw the release of their sophomore album and debut on Nuclear Blast Records entitled "Back to the Noose". The album was a vicious aural assailment of speedy riffs, anthemic drinking jigs, and timeless panty-droppin' shanties: An overall thrashterpiece.

In early 2010 the pirates dropped Captain Crashride back off on his lonely island and employed the steady hand of the witty and adept Bootsmann Collins. With the capable Collins on board the band penned and recorded their third studio album entitled "Crime Always Pays".

Be warned, the pirates three be an unstoppable force to be reckoned with and shall continue their sonic assault upon all who appose. When in the faces of death and the need for piratical thrash, look to the coast and witness the black sails on the horizon as SWASHBUCKLE pillages your village.

We Hate The Sea

Back To The Noose

Crewed By The Damned