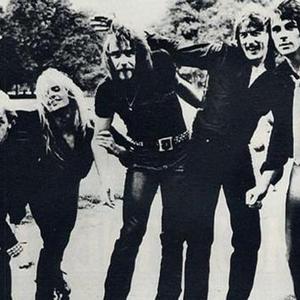 Judas Priest are pioneers of the Heavy Metal genre, and arguably created the "Metal" look. Priest were one of the bands that helped spur the heavy metal genres evolution by discarding most of its blues influence and created a "metallic" sound which inspired generations of metal bands to come. Judas Priest were one of the first heavy metal bands and are considered one of the most influential bands in the genre, helping the evolution of speed and thrash metal in the 80s.

K. K. Downing and bassist Ian Hill had known each other since early childhood, as they lived near one another and attended the same nursery and school in West Bromwich. They became close friends in their early teens, when they shared similar musical interests (Jimi Hendrix, The Who, Cream, The Yardbirds) and learned to play instruments. The band was founded in 1969 in Birmingham, England, United Kingdom, after a local ensemble named Judas Priest (after Bob Dylan's song "The Ballad of Frankie Lee and Judas Priest" from the John Wesley Harding album) split up. The band's singer, Al Atkins, approached Downing and Hill, who were playing as a power trio with drummer John Ellis, and asked if he could become their singer. With Atkins now in the band, Downing suggested they change their name to Judas Priest as he had been a fan of the original band.

Later, in 1972, Rob Halford and drummer John Hinch joined to replace Atkins and Partridge, respectively. A second guitarist, Glenn Tipton, was also added to the line-up in 1974 as compensation for their record company's (Gull Records) suggestion to add a horn section to the first album, Rocka Rolla.

Downing and Tipton's harmonised guitar lines were not particularly common at the time, but became a trademark for the group and would inspire other bands such as Metallica, Iron Maiden and Megadeth to do the same. It is now a standard feature of many heavy metal bands and appears in many of metal's sub-genres.

The band featuring Halford, Downing, Tipton and Hill would go on to record 14 albums from 1974 through to 1990. Their second album, Sad Wings of Destiny (released in 1976), is considered one of the most influential metal albums along with Black Sabbath's self-titled d?but.

Priest went through a considerable amount of drummers between their formation and 1980 when Dave Holland joined and stayed until 1988's Ram It Down, and this is arguably the inspiration for Spinal Tap's misfortune with drummers. Racer X drummer Scott Travis joined the band to record 1990's Painkiller album and has been with the band ever since.

1980 saw Priest release perhaps their most famous album, British Steel, which featured a more focused and sleek approach to metal than previous efforts. This, coupled with catchy, fist-pumping riffs and memorable vocal melodies ensured the band a string of consecutive platinum selling albums. Fans were slightly disillusioned with 1986's Turbo, which featured electronic drums and synthesised guitars, but the band were still selling out arenas worldwide.

Halford left the group in 1993, going in a new direction with his new, short-lived metal band, Fight and, later, 2wo. He began a successful solo career with his own self-titled band in 1999.

With Halford gone, the future looked bleak for the band, but after numerous searches for a suitable replacement, they found something special in tribute band front man Tim "Ripper" Owens. This story forms the basic plot of the movie "Rock Star," which was originally to be completely about Judas Priest and the Ripper, titled "Metal God," but the script was altered after the failure to reach an agreement with the band. Judas Priest recorded 4 albums with Owens (2 studio, 2 live records) which were greeted with mixed reactions from fans.

In 2003, the Judas Priest's 1990 line-up was restored when Rob Halford returned to the group after rekindling the relationship during work on Judas Priest's 4-CD career retrospective "Metalogy." In 2004 the band played Ozzfest and released a CD of new studio material entitled Angel Of Retribution and an accompanying live DVD in 2005, enjoying a successful world tour that year.

After an emotional reunion, extensive tour and new studio album, the band released a follow-up album in June 2008, entitled Nostradamus. Unusually for Priest, this album was a double CD and was their first conceptual album; based upon the life and predictions of Nostradamus, which instilled a mixed reaction among fans.

In 2011, KK Downing announced his retirement. The band itself stated that their next world tour, Epitaph, would be their last. Downing's replacement is the former guitarist for Steve Harris's daughter, Lauren Harris. The new guitarist was born in 1980 when Judas Priest was on the British Steel tour. His name is Richie Faulkner.