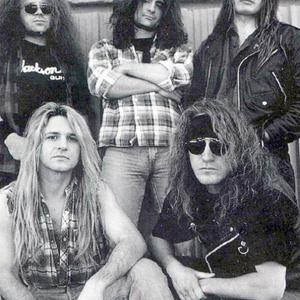 Omen is a popular band/artist/production name in the music world. There are at least 6 artists/groups which use that name. (Discogs lists as many as 11 (eleven) different artists/groups.) They span the gamut from rock music to metal to edm. 1. OMEN is an American Heavy Metal band that was formed in Los Angeles in 1983 by guitarist Kenny Powell, as he left the band Savage Grace. The other three founding members were: lead singer J.D. Kimball, bassist Jody Henry and drummer Steve Wittig.

1. OMEN is an American Heavy Metal band that was formed in Los Angeles in 1983 by guitarist Kenny Powell, as he left the band Savage Grace.
The other three founding members were: lead singer J.D. Kimball, bassist Jody Henry and drummer Steve Wittig.
They quickly signed a record deal with the uprising label "Metal Blade Records" and released 4 albums and one E.P. before splitting up in 1989.
Kenny Powell later on founded a new band called Stepchild and released an album with them. During this time he played with the idea to reform Omen which came into realization in 1997, at that time featuring Kenny's son Greg on vocals before returning to his own project Stompin' Ground.
Omen are now back again with a new line-up and new material.

2. Omen is a power metal/thrash metal/speed metal band from Hungary. It was formed after the break of Pokolg?p by L?szl? Nagyfi (guitar) and J?zsef Kalap?cs (vocals) in 1990. They were joined by Ossian's drummer Zolt?n Nagyfi (drums), Andr?s ?cs (bass) and Bikini's guitarist Zsolt Daczi. Soon after, Daczi had to leave Omen because of his duties with Bikini, so Tam?s Szekeres (one of the most renowned guitarists in Hungary) joined the band. This lineup released 3 albums, but in 1993 Szekeres left, to be replaced by L?szl? Nagyfi's former apprentice Lajos S?rk?zi.

The band almost split up in 2000 when Kalap?cs and S?rk?zi left to form Kalap?cs. Omen was on hiatus until 2003, when Daczi re-joined the band (to be fired from Bikini in less than a year). The vocalist became Zolt?n Pint?r, mostly known as Oki, renowned for his participation in a reality show earlier on. In the meantime, ?cs also left to engage in other activities than music; he was replaced by former Ossian and Fahrenheit bass player G?bor V?r?s.

Soon Oki was fired for his inability to learn the lyrics of the songs (and thus ruining live shows); Tibor Gub?s joined the band in 2004, re-recording a song for the 2004 best of album. After the promising beginnings with Gub?s, Daczi had a severe traffic accident, which once again knocked the band to hiatus for a year. The first concert of this lineup was in October 2005; the new album was released in February 2006. In the summer of 2006, Daczi was diagnosed with cancer. During the fall of 2006, a re-recorded version of the 2003 album Tiszta sz?vvel was released under the title Agymos?s, with Gub?s on vocals instead of Oki. From early 2007 on, Mikl?s Cziffra played instead of Daczi in the concerts as the latter was not strong enough to go on stage.

During the spring of 2009, former Akela, current After Rain guitarist Zsolt "Szupermen" Szij?rt? joined, but Gub?s was fired because of similar reasons to the firing of Oki. In the fall of 2009, the vocalist of hard rock band P. Box, ?rp?d Koroknai, was added to the lineup.

3. Omen is a Polish heavy metal band that released one single and split up. http://www.metal-archives.com/band.php?id=38332

4. Omen is a dubstep artist from England whose tracks appear on various dubstep compilations including Tectonic Plates.

5. Omen is a Black Metal band from Malaysia.
They released a few demos in 2009.

7. An American rapper from Chicago. Chicago-born emcee, Omen (born Damon Coleman) goes his own route, delivering incredible songs shaped by rhymes, melodies and composition inspired, by some of his favorite artist growing up such as Nas, Stevie Wonder, Michael Jackson and Common. However, his most significant influences come from his own real life situations and emotions as well as his vivid imagination.

Honest in rhyme, fresh in appearance and forward in thinking, Omen embodies a Chicago-confidence and originality seen most recently in the likes of hometown heavyweights Common, Kanye West and Lupe Fiasco.However, Omen is his own man. And at six-foot-three, he's head and shoulders above a sea of rap aspirants who simply cannot do what he does. Not only did he pen, produce and perform all the tracks on upcoming album Beyond, Omen composed the notes, hashed out the chords and arranged the instrumentation for much of the album, as well.

As comfortable and creative at the piano as he is in the recording booth, Omen's turned an everyday passion for music into a productive obsession. His efforts have resulted in a sound that, in his own words, ?is nontraditional with old elements.?

Teeth Of The Hydra