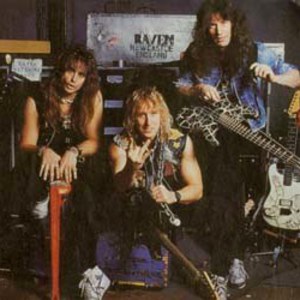 2) Aactress/singer Raven-Symon&eacute;, who has often been credited simply as Raven.

3) Raven is an Austrailian MC making his mark in Aussie Hip-Hop. He has recently dropped his debut solo release "Humble Beginings." Raven a member of the highly regarded Hungry Humans collective (who is;Thorts, Aeteacix, Geko, Budsa, Sesh, Aksis one, Fatty Phew & Autism) and co-founder of the Lost Soulz.

4) RAVEN is a solo project by Terui Toshiyuki (????), bassist of BLANKEY JET CITY and ROSSO. In 2003, RAVEN released one album, Kagirinaku aka ni chikai kuro (?????????), most notably featuring Chiba Yusuke of THEE MICHELLE GUN ELEPHANT and ROSSO on vocals for most of the tracks.

6) Raven was an influential band from Buffalo, N.Y., in the 1960s. Raven began as Stan Szelest's backing band in Stan and the Ravens, which featured Tom Calandra on bass and Gary Mallaber on drums. When Stan and the Ravens broke up, Calandra and Mallaber joined a band called The Rising Sons with vocalist Tony Galla, guitarist John Weitz, and pianist/keyboardist Jimmy Calire.
Raven manager Marty Angelo, trying to book gigs for the band outside of Buffalo, met Jimi Hendrix at Steve Paul's Scene in New York City in 1967. Hendrix was so impressed with the tape he heard, that he convinced the club's owner to book Raven.
Later that same year, Angelo sent the same tape Hendrix had heard to Beatle George Harrison. Harrison sent a letter back to Angelo which expressed an interest in signing Raven to Apple Records.

7) Raven is a black metal band from Norway, formed in 1993. Their demos were released under the name Ravn. Born in 1993, these recordings are a piece of history of True Norwegian Black Metal, involving Rune Vedda, one of the Forgotten Woods masterminds. ?TMS? proves the unbelievable primeval strength that this revolutionary genre can express. All blacksters simply can'tignore this milestone... And today's wannabe extreme listeners may be affected both by vicious, sick and abrasive feelings of sharpened guitars and by a kind of inhuman atmosphere pervading the whole album. Far from today's music standards and double-faced sound professionalism, conceived when Black Metal was just instinct and hunger and to express the dramatic and primeval force of this genre, ?The Murder Session? is not only one of the sickest releases ever from Norway, but also proves and ?reports? how a direct musical approach has been the boundless strength of Black Metal since ever. Here's where the word cult has to lie down, under the veil of the cold wind.

8) Raven is a project of the German band Sleipnir.

9) Raven is a heavy metal band from Newcastle, England, UK, associated with the New Wave of British Heavy Metal, that formed in 1975. They also opened for punk bands The Stranglers and The Motors. They had a hit with the single "On and On", and refer to their music as "Athletic Rock." Formed by brothers John and Mark Gallagher, Raven quickly set the pace for the burgeoning metal renaissance in the UK at the time. Raven began creating a sound which was rooted in British hard rock with progressive tendencies and a willingness to take musical chances . The band's highly energized live show and interaction between members developed an image and style of play the band described as "athletic". They began wearing guards, helmets and plates from various sports (hockey, baseball,etc...) and incorporating them into the playing of their instruments (for instance, elbow pads were used to strike cymbals for a unique performance angle). Eventually, the band signed with Neat Records, the legendary, low-budget metal label of the Northlands, releasing Wiped Out and Rock Until You Drop within a year's time and making an impressive showing on the UK charts a the time. Sufficient noise was made for the American market to take notice and New Jersey's Megaforce Records signed them, issuing their next recording in the States as All for One. The band came stateside in 1983 and toured extensively with Megaforce bands Metallica and Anthrax, both of whom would gain a place of prominence in the growing thrash metal movement. Manager/Megaforce founder Johnny Zazula believed that Raven were major label material and kept them touring constantly until the big labels noticed. The infamous Live at the Inferno recording was a product of one of those tours. Atlantic Records signed Raven to a worldwide contract after a minor bidding war (major label contracts would follow for Metallica and Anthrax in the following year). The band moved its permanent base from Newcastle to New York.
Stay Hard was released in 1984 and proved a minor hit on the strength of single/video On and On. The Atlantic years proved to be less-than-stellar for the band. A drastic shift in a more "commercial" direction came at the label's behest, with many diehard fans being alienated by the slick, lightweight production of The Pack Is Back (effectively marketing the band with their weird musical forays and confusing image was likely very difficult). However, the band recorded 2 LPs and the Mad EP before being let go by Atlantic. After touring behind the Life's a Bitch album, Wacko left the band to spend more time with his new wife and family. He would later pursue a career in audio production and engineering, eventually working with jazz greats Branford Marsalis and Harry Connick, Jr. Virginian Joe Hasselvander (ex-Pentagram) took over the drum set and the band dropped the outlandish image for a more conventional "denim and leather" look for their 1988 release Nothing Exceeds Like Excess. After the advent of grunge and the dissolution of their record label (Combat Records) led the band to concentrate on continental Europe and Japan, where they retained more of a following. The band recorded and toured until 2001, when a wall collapsed on Mark, crushing his legs. Raven went on hiatus for nearly 5 years while the guitarist rehabilitated. As of 2006, Raven is touring with a new release in the works.

10) Raven was a funeral doom metal band from Finland. They released three demos: "Rehearsal I", "Alone In the Mist" and "Promo Tape". Changed their name to Shape of Despair in September 1998.

12) Raven (aka little_raven and aka Corvus Mellori), music experimenteur from C?rdoba, Argentina. Founder of The Guanoson (ns loli ambient), Princesita (experimental/cybergrind), Some australian monkey known as koala (electronica) and Notre P&egrave;re (black metal), co-founder of Proyecto de Prueba (dark ambient/drone) and Waremehime (8-bit pop), and member of Void>Null (drone doom), among other solo projects that will never be revealed to small-minded earthlings.

These are the times