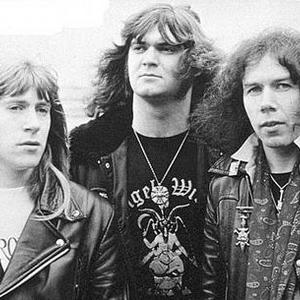 Angel Witch is a British heavy metal band assembled in 1977 in England. They were closely associated with the nwobhm (New wave of British heavy metal) movement together with bands such as Iron Maiden and Saxon. The band was founded under the name of Lucifer and initially comprised guitarist and vocalist Kevin Heybourne, guitarist Rob Downing, bassist Kevin Riddles and drummer Steve Jones. Lucifer split and Steve Jones joined up with Bruce Dickinson to form Speed. The remnants of Lucifer became Angel Witch in the following year,when Dave Hogg joined on drums.

Angel Witch's first song to achieve mainstream popularity was "Baphomet", which was included on a compilation entitled Metal for Muthas. This song drew a fair amount of attention to the band and they eventually signed a recording deal with EMI. However, the deal was soon cancelled, due to the bad performance of their first single released under the EMI label which was entitled Sweet Danger and lasted a single week in the British charts.

In 1980 Bronze Records picked up the band and they soon proceeded to record and release their debut album, self-titled Angel Witch. This album is considered one of the most notable from the NWOBHM, but subsequent to the album's release, the band's structure began to fall apart. Kevin Riddles and Dave Hogg left the band to join Tytan, and despite Heybourne's attempts to continue Angel Witch with other musicians, the end of the band was declared and he joined Deep Machine.

Angel Witch was brought back to activity in 1982, when Heybourne and two musicians from Deep Machine - namely vocalist Roger Marsden and drummer Ricky Bruce - left to assemble a new Angel Witch line-up together with bassist Jerry Cunningham. This line-up lasted a very short time, as Marsden's voice didn't fit the style of the band very well. He was fired from the band and Heybourne assumed the vocals once more.

By 1983 the band had ceased its activity and Heybourne moved to Blind Fury. In 1984 Angel Witch was once more brought to life, this time with the help of bassist Peter Gordelier, singer Dave Tattum and with Dave Hogg returning to the drums. This line-up recorded the album Screamin' N' Bleedin'. Dave Hogg left the band one more time, but not without many snide remarks from the band's fans. He was replaced by Spencer Hollman. With the new drummer they recorded Frontal Assault, which deviated heavily from Angel Witch's previous albums in having many melodic elements.

Dave Tattum left the band in the same year and for a few years Angel Witch played as a trio in sporadic live performances. In 1989, they recorded a new live album, entitled simply Live - not to be mistaken with the band Live.

Heybourne decided that it would be in the band's best interest to move to the USA, but the other members had no way of accomplishing that, having stable lives on their home country. Thus, an American incarnation of Angel Witch was born. It was composed of Heybourne, bassist Jon Torres (from Laaz Rockit), drummer Tom Hunting and guitarist Doug Piercy. This line-up functioned quite well and soon the band had booked a fair amount of shows throughout the USA. However, it was found that Heybourne had some pending issues regarding immigration, and he was arrested one day before the first concert of the band. Without Heybourne, Angel Witch was soon dissolved.

After the release of the Resurrection compilation in 2000 the band intended to play together once more but after a series of internal conflicts Heybourne assembled yet another line-up with new members. As of 2001 the band is still active even though they do not perform concerts frequently.

As Above, So Below