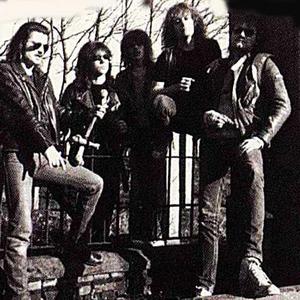 Mercyful Fate is a Danish heavy metal band which helped inspire black metal through their lyrics and image. The band was founded in Copenhagen, Denmark in 1981 from the remaining members of Hank Shermann's band Brats and King Diamond's band Black Rose. In early 1981 they helped out Michael Denner with demos for his band Danger Zone. Soon, Shermann, Denner, Diamond, and Denner's bass player Timi Grabber realized their potential as a unit and started performing as Mercyful Fate. The band experienced the usual member changes for a new band, as Denner left (and later returned).

The band was founded in Copenhagen, Denmark in 1981 from the remaining members of Hank Shermann's band Brats and King Diamond's band Black Rose. In early 1981 they helped out Michael Denner with demos for his band Danger Zone. Soon, Shermann, Denner, Diamond, and Denner's bass player Timi Grabber realized their potential as a unit and started performing as Mercyful Fate. The band experienced the usual member changes for a new band, as Denner left (and later returned). In addition, the drummer position was a revolving door, but Kim Ruzz finally established himself as the drummer.

Several demos and live shows survive from 1981, including their infamous first concert "Sabbath of all witches" held in early/mid 1981.

In early 1982, the band contributed to the Ebony Records sampler Metallic Storm. Later on in the year, Mercyful Fate recorded its first official release, Mercyful Fate, on vinyl for the Dutch label Rave On. The release included heavy and evil material that would later inspire the black metal genre (although Venom and Bathory are as equally considered as the forefathers of black metal).

Following the EP, the band released Melissa in 1983 and Don't Break the Oath in 1984, which are now considered by many to be classics in both the power metal and black metal genres. Following the tour (which saw them play in the United States for the first time) in support of Don't Break the Oath, Diamond split ways with Mercyful Fate in April 1985 as a result of frustration over creative differences with Hank Shermann. With him, Diamond brought band mates Hansen and Denner to found a new band under his own name. Diamond's new venture continued the tradition of Mercyful Fate, but with a more progressive, conceptual twist to it. In response, Hank Shermann formed the band Fate, which pursued a more AOR direction.

In July 1992, the band reformed and signed a contract with Brian Slagel's Metal Blade Records. All the original members without Kim Ruzz (replaced by Morten Nielsen) reformed and released In the Shadows in 1993. The album featured a re-recording of "Return of the Vampire", with Metallica drummer and Mercyful Fate enthusiast Lars Ulrich playing on the track. In the years since, the band has released four other albums, with the last being 9. Similar to the band's first run, members have left and been replaced; Michael Denner left and was replaced by Mike Wead, Drummer Nielsen was later replaced by Snowy Shaw who was then replaced by Bjarne Holm, Bassist Timi Hansen left quickly and was replaced by Sharlee D'Angelo. Following the release of 9 (1999), King Diamond put Mercyful Fate on hold and continued his solo career. Shermann, Denner, Holm and (King Diamond Bass player) Hal Patino formed Force of Evil, which incorporates many of the themes of the original Mercyful Fate.

In a March, 2008 interview, King Diamond stated that Mercyful Fate is currently "hibernating", but had never split up. Though he does not know when the band will become active again, he said "It's definitely not finished, at least in my book.". With the Re-union in 1993, the same lineup returned for the album and European tour, with the exception of Drummer Kim Ruzz, who was replaced by Snowy Shaw. Bassist Timi Hansen also left after the European leg of the tour, and was replaced by Sharlee D'Angelo.

The Lineup remained the same for "Time" and "Into the Unknown". Snowy Shaw was then replaced by Bjarne Holm on drums.

"Melissa" is the name of a skull King Diamond used to carry on stage, and also a fictional deceased witch that appears in three songs. Before the recordings of the album Melissa, King Diamond had acquired a human skeleton that he named "Melissa". He used the femur bones to make his trademark microphone handle. The skull was apparently stolen during a show in the Netherlands.

The skull was inspiration behind the album Melissa, and the title track of the album is very different from the rest of the album, as it is much slower than the other songs (which are speedier and more aggressive). The lyrics tell of a male protagonist (usually identified as King Diamond himself by fans) who lost the love of his life, who was a witch who was burnt at the stake by a Catholic priest. The story builds itself up around the emotions of the protagonist, who first feels sadness and uncertainty, hope for her to still be alive, and then rage over his loss. He swears revenge on the priest who burnt her, proclaiming that he must die in the name of hell. The song ends with a whisper that hints Melissa's spirit is still with the protagonist.

The second song Melissa appears on is on the album Don't Break the Oath in the song "Come to the Sabbath", once again at the climax of the album. The lyrics tell about a Satanic coven holding a sabbath, in which the protagonist emerges to perform a ritual to "put an evil curse on the priest who took the life of Melissa". Though she is not the focus of the lyrics this time, because of her mention the song is known as a "Melissa song". Additionally, one of the main characters on the King Diamond's album Them was named "Missy", which is a common diminutive of Melissa.

The final song Melissa appears in is on Mercyful Fate's reunion album In the Shadows on the song "Is That You, Melissa?". The lyrics tell of the protagonist once again in sorrow about the loss of his love. He begins to hear her voice and goes to the coven to have them perform a ritual to speak with her ghost. The coven objects, saying that it is against the rules. The protagonist is visited by Melissa's spirit who shares a kiss with the protagonist. The subject of the song is argued by some; one side says the lyrics are not a continuation of the Melissa story but a tribute by the band to their past, while the other side sees it as the end of the Melissa story. It is widely accepted that she is the girl on the album cover of "In the Shadows" facing the old oak tree. After In the Shadows, Melissa has not been mentioned any more in both lyrics and artwork.

Return Of The Vampire (The Rare And Unreleased)

Return Of The Vampire Part II (Rare And Unreleased Recordings)