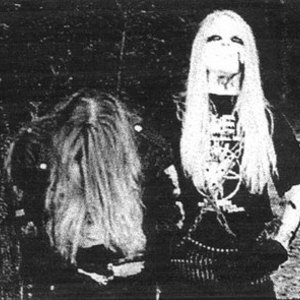 Beherit is a black metal band from Finland (Rovaniemi, Lapland). The band was formed in 1989 by Nuclear Holocausto (Marko Laiho), Sodomatic Slaughter (Jari Pirinen) and Demon Fornication, with the purpose of performing "the most primitive, savage, hell-obsessed black metal imaginable". "Beherit" is the Syriac word for Satan. Through the uncommercial nature of their music, visuals and live performances, the band quickly attracted a cult following. Besides the "raw" sound, the band's music is noted for its avant-garde side and emphasis on atmosphere.

Beherit are now regarded as a pioneer in their genre.

As a full band, Beherit released two full-length albums and many demos of raw and minimalistic black metal. They disbanded soon after the release of the experimental 1993 album Drawing Down the Moon, which is now considered a classic of the genre. Laiho, the group's mainman, continued as a solo project and released two more albums under the band's name, H418ov21.C in 1994 and Electric Doom Synthesis in 1995. These albums are usually categorized as dark ambient. Although they were completely electronic, the albums carried the atmosphere of the band's black metal recordings. Original members Nuclear Holocausto and Sodomatic Slaughter reformed the band in 2008, now a four-piece featuring new members Ancient Corpse Desekrator and Abyss.

The Oath of Black Blood (1991?1992)
Beherit's first full-length, The Oath of Black Blood, includes material recorded from June to September 1990. The album was released in 1991. The album is traditional, fast and brutal old school black metal, heavily influenced by death metal, thrash metal and grindcore. However, it is not a separately recorded studio album. The band got some funding for recording an album from their record label at the time, Turbo Music, but supposedly spent the money on alcohol. The label then released their demo Demonomancy and 7" EP Dawn of Satan's Millennium as a compilation, without the band's permission, and named it The Oath of Black Blood, which was originally supposed to be the name of the new album. Laiho commented on the album in an early 1992 interview for Metal Hammer magazine:

I hate the album! It's so bad, we never wanted to release it. The songs are from our 'Demonomancy' demo and our label Turbo Music just used a regular cassette for the album pressing. Honestly, I never sent them the master tape... We're planning to release a proper LP soon, this time on my own label. The result should be much better.

The album is now generally regarded as a full-length release. Spinefarm Records re-issued it in 2005, and Season of Mist in 2006. In 1991, the band members briefly performed under the name, "The Lord Diabolus", from which a single demo tape was made and released independently before the band returned to working under the name Beherit. The songs "Intro (Tireheb)" and "Nocturnal Evil" were later rereleased as Beherit songs.

Ambient era (1994?1996)
Despite the album's success, Drawing Down the Moon was to remain the band's last black metal release, as they split up the next year. Laiho still recorded two albums of dark ambient music, H418ov21.C and Electric Doom Synthesis, and released them under the band's name. As the band didn't reform and Laiho had eventually lost interest in black metal, he went on to continue his musical career in dark ambient as "Suuri Shamaani" and in hardcore techno as "DJ Gamma".

Beherit was reformed in 2008, with original members Nuclear Holocausto (having returned to Finland from Thailand) and Sodomatic Slaughter, and newcomers Ancient Corpse Desekrator and Abyss. The new album is a return to the black metal genre, and also marks Beherit's return to a full band configuration after existing as a solo project from 1994 until its disbandment in 1996. The album, entitled Engram, is the band's third black metal album (fifth overall) and first in 14 years.

Drawing Down the Moon

The Oath Of The Black Blood