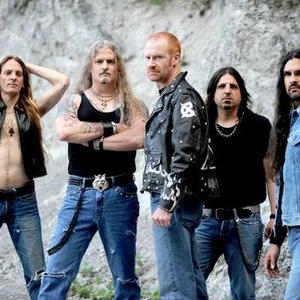 Iced Earth is an American power metal band that combine heavy metal and speed metal/thrash metal genres in their music. The band was formed by Jon Schaffer, the lead songwriter and rhythm guitarist, in Tampa, Florida in 1984. The original name of the band was Purgatory but was then changed to Iced Earth. Iced Earth's music is often described as the style of Iron Maiden combined with 80's thrash metal.

Iced Earth's music is often described as the style of Iron Maiden combined with 80's thrash metal. The most distinctive element of the band's sound is the stuttering right-hand gallop of rhythm guitarist Jon Schaffer, which sounds something like the ?eighth-note, two-sixteenth-notes' gallop made famous by Iron Maiden's bass player/songwriter Steve Harris (in such songs as ?Run to the Hills?, ?The Trooper?, and ?Caught Somewhere in Time?), varied rhythmically. Overtop of this gallop are typically laid strong melodic hooks, sometimes doubled by two guitars playing in harmony. The vocals are often high-pitched, but express a full range, while the rhythm section uses thrash and power metal techniques such as double-bass-drumming to keep the speed and energy high. Iced Earth's drummer is known for his frequent use of drags and flams on the bass drum.

Today, Jon is the only original member in the band, having changed multiple guitarists, drummers, and vocalists. The two most recognized vocalists of the band are Matt Barlow and Tim Ripper Owens, the former vocalist of Judas Priest. Matt Barlow ended up marrying Jon's sister, making Matt the brother-in-law of Jon Schaffer.

Iced Earth lyrics tend to deal with theological issues such as punishment and sin, destiny, heaven and hell, the Antichrist and the apocalypse. Many of the band's recent albums have been concept albums written around a theme, e.g. the antihero Spawn (The Dark Saga), horror movies (Horror Show), historical wars (The Glorious Burden) and the double concept about the anti-christ (Something Wicked).

Festivals Of The Wicked (Live)