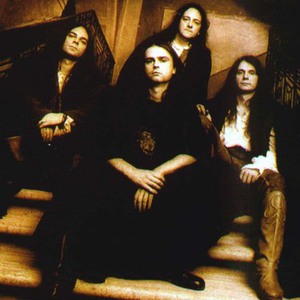 Look for further news at www.blind-guardian.com
or go to their label's Blind Guardian profile at www.nuclearblast.de/de/label/music/band/about/71036.blind-guardian.html

Blind Guardian was founded in 1984 by Andr&eacute; Olbrich (guitar), Hansi K&uuml;rsch (vocals, bass), Marcus Siepen (guitar) and Thomen Stauch (drums), (left the band in 2005, replaced by Frederik Ehmke). Before calling themselves Blind Guardian, the band released two demos under the name Lucifer's Heritage in 1985 and 1986.

Blind Guardian has always been inspired by the fictional worlds of fantasy writers such as J.R.R. Tolkien, Michael Moorcock, Margaret Weis, Tracy Hickman as well as traditional legends and epics. Stephen King's Dark Tower series has also been an influence on the band, evident in "Somewhere Far Beyond" as well as numerous Demons & Wizards songs. Over the years, a running theme has developed associating the band members with traveling bards.

The line-up has been the same since 1988, but in 2005 the drummer, Thomas Stauch, left the band due to the direction the band was taking in their last studio albums, "Nightfall In Middle-Earth" and "A Night at the Opera". He was replaced by Frederik Ehmke.

In November 2006 they were the headliners at the Monterrey Metal Fest in Mexico.

In 2007 Blind Guardian went to the Wacken Open Air.

The band has also teamed up with the creators of the video game "Sacred 2" to make an in-game concert sequence featuring renditions of the band members playing an as-of-yet unreleased song "live".

For now they took a small vacation and won't be playing any tours: "As for touring activities I doubt we are going to play any concerts up to the end of 2009. Any earlier appearance would be a big surprise, but you never know..." -Hansi's words

Their latest album was released in 2010.

Line-Up:
Hansi K?rsch - Vocals (and Bass on the Studio-Albums and live before 1998) - He is the also the singer of the Band Demons & Wizards (Together with Iced Earth's Jon Schaffer).

Live there is also:
Oliver Holzwarth - Bass - He plays bass as a session musician, though he tours with the band. The primary reason he isn't the official bassist is that the band doesn't want to have to fire him, should Hansi ever decide to pick the bass up again. He's also in the Bands Coldseed, Sieges Even and he was a member of Paradox and Val' Paraiso. Oliver is a brother to Rhapsody drummer Alex Holzwarth.

Deliver Us From Evil (EP)

Imaginations From The Other Side Live

Live Beyond The Spheres CD3

Live Beyond The Spheres CD2

Live Beyond The Spheres CD1

Beyond The Red Mirror CD2

Beyond The Red Mirror CD1

Twilight Of The Gods (EP)