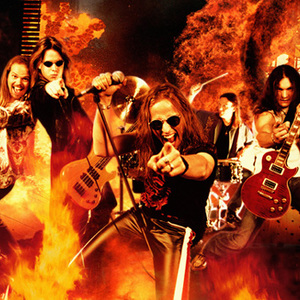 Edguy is a power metal band from Fulda, Germany formed in 1992 and is currently signed to Nuclear Blast. The current lineup features Tobias Sammet on vocals (and occasionally keyboard), Jens Ludwig and Dirk Sauer on guitar, Tobias Exxel on bass, and Felix Bohnke on drums. They released their first album, Savage Poetry, in 1995 (re-recorded in 2000), and followed up with Kingdom of Madness in 1997, both when all members were still in their teens.

With Vain Glory Opera (1998) the band started to gain some worldwide attention, and even more the next year upon the release of another classic; Theater of Salvation, which was considered an even bigger breakthrough.

The success continued with Mandrake (2001). With their subsequent albums, Hellfire Club (2004) and Rocket Ride (2006), Edguy have developed their sound in a more heavy metal and hard rock direction. This has caused some resistance from old power metal fans, but has also brought new fans from different fields of music.

Space Police - Defenders Of The Crown