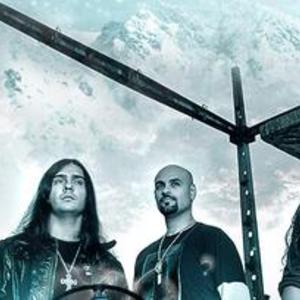 1) Shaman was the former name of the Finnish Folk Metal band called Korpiklaani. Shaman is heavy music with yoik singing, shaman drum and lyrics in Northern Sam? language (an endangered Finno-Ugric language). For a person unknown to Sam? music features it perhaps sounds like it has a bit of an indian sound, the chanting and the drums make it sound like native American music mixed with metal. When Shaman decided to turn in a different direction with their music, they decided to change their name to Korpiklaani (meaning forestclan) though you can still hear things reminding of Shaman. The song "Beer Beer" by Korpiklaani is just a revised version of Shaman's song "Vuola lavilla".

2) Shaman is the name of a Brazilian Power Metal band, who had changed their name to Shaaman before the release of their second album Reason due to copyright issues. Shaman formed on 2000 by three Angra ex-members - Andr? Matos, Luis Mariutti and Ricardo Confessori. Some time later, Luis' brother Hugo Mariutti (guitars) joined the band, and completed the original line-up. Shaaman split up due to 'musicial differences' in October 2006.

Following the split up, Ricardo Confessori constructed a new line up featuring guitarist Leo Mancini, vocalist Thiago Bianchi and bassist Fernando Quesada. The name "Shaman" was then re-adopted, as per the band's new website, and released the album Immortal in 2007.

3) SHAMAN (USPTO trademark in 1990) is a Celtic and World music folk rock group from New York City with their own blend of music to raise ecological and social awareness which they called ?Earth Music?. They released 5 albums of recorded music under the Indie label, Solstar Communications from 1990 to 1995. The name SHAMAN was chosen by founder Brahm Stuart (AKA Shaman Starseed) for it's connotation of communicating for unseen forces of other dimensions to humanity. Shaman played regularly during the 90's at festivals and clubs in the Northeast U.S., notably at the Starwood Festival and eco-rock-club, Wetlands in New York City where they were a regular headliner advertised as ?Celtic Hippie Dancing?. The underlying mission of the group was to help raise awareness of the need to change social consciousness due to the ecological peril that we are in, and to promote a new paradigm of unconditional love and good vibrations for all living beings. Shaman's 4 albums include ?Ode to Mother Earth? 1990, ?Live Hobbit Day? 1992 and ?The Green Man? 1994, as well as a folk music compilation, ?Dans Mediterraneo? 1993. They now reformed to release upcoming cd:
A Change is in the Wind.

4) Shaman is Andreas Henning, a Progressive-Trance producer signed to Plusquam Records in Germany. His musical career started back in 1998 when a friend showed him the first steps in music production and he got hooked on it, fascinated to be able to create music of his own. Over the years, he made big steps forward, improving his production skills and finding his own style. Complex surface compositions, deep bass constructs, carefully used melody sequences and an overall hypnotic groove are the ingredients of his very unique sound. After being present on numerous compilations on recordlabels like Digital Structures, Plusquam, Manta, Novatekk, DOMO, Dance'n'Dust, Tribal Vision, the time was come for his first album "Foretaste" which was released on Plusquam Records in 2004.
August 2006 saw the release of his second studio album "Grv Soldier."