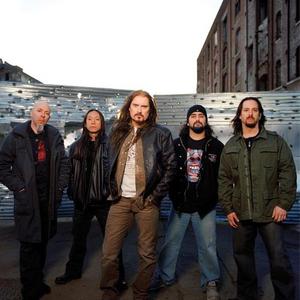 Dream Theater is an American progressive metal band formed in 1985 under the name Majesty by John Petrucci, John Myung, and Mike Portnoy while they attended Berklee College of Music in Massachusetts, before they dropped out to support the band. Though a number of lineup changes followed, including Portnoy's departure in 2010, Petrucci and Myung remain today along with James LaBrie, Jordan Rudess and Mike Mangini.

The band released an album entitled Systematic Chaos, their ninth studio album, in collaboration with their new label Roadrunner Records. The album is available in two formats, first one being just a regular edition CD and the other being a CD/DVD album with the entire album mixed in 5.1 surround sound and also "Chaos in Progress - The Making of Systematic Chaos" (a 90-minute documentary directed by Mike Portnoy).

The band is well-known for the technical proficiency of each instrumentalist, winning many awards from music magazines. They are highly respected by many of rock and metal's biggest names, leading to collaborations between Dream Theater members and many other well known musicians. In a famous example, guitarist John Petrucci was named as the third player on the G3 tour with Steve Vai and Joe Satriani, following in the foot steps of Eric Johnson, Robert Fripp, and Yngwie Malmsteen.

Dream Theater is also noted for their musical versatility and the many different genres their music incorporates, which has made it possible for them to perform with a very diverse range of acts. Some of their more notable touring partners include Deep Purple, Emerson Lake and Palmer, Iron Maiden, Joe Satriani, King's x, Marillion, Megadeth, In Flames, Pain of Salvation, Porcupine Tree, Opeth, Queensr&yuml;che, Spock's Beard, Fear Factory, Enchant, Symphony X, Yes, Big Wreck, I Mother Earth and Fates Warning.

It may also be noted that Dream Theater's previous name was Majesty, after the band listened to the song Bastille Day by Rush and described it as being majestic. However, this name was short-lived as another band were performing and recording under the same name. So, they re-named themselves Dream Theater after a small cinema which was close to where drummer Mike Portnoy's father was living at the time. The name Majesty is the source of the band's "M" logo appearing on the cover artwork of several albums. The Dream Theater song entitled "Ytse Jam" is "Majesty" backwards and "Ytse Jam" is also the name of Mike Portnoy's record label.

Lost Not Forgotten Archives: Made In Japan

Lost Not Forgotten Archives: The Number Of The Beast (Live In Paris 2002)

Lost Not Forgotten Archives When Dream And Day Reunite