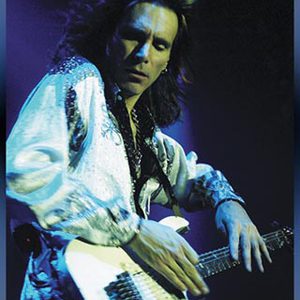 When growing up, the young Vai became interested in rock giants such as Jimi Hendrix, Frank Zappa, Alice Cooper (guitarist Glen Buxton), and Led Zeppelin (Jimmy Page), leading him to take up the guitar. Prior to attending Berklee College of Music, Steve frequently jammed with his teacher Joe Satriani and played in numerous local bands. He has acknowledged the influence of many guitarists, including Jeff Beck, fusion guitarist Allan Holdsworth and, of course, Zappa.

Steve's career was launched by his fascination with Zappa's music. A persistent rumour at Berklee tells how Steve would skip classes, spending time in the school's library transcribing Zappa's works by ear. Steve mailed transcriptions of Zappa's guitar solos to him, and after meeting Vai for the first time Zappa was so impressed with the abilities of the young musician, he hired him to transcribe his seemingly endless array of experimental symphonic rock. In these formative stages of his career, Vai's talent was showcased on such songs as "Moggio" and "Stevie's Spanking".

While employed by Zappa, Vai would at times tour with Zappa's band and engage in a friendly competition with the audience, wherein audience members could bring in musical scores and see if Vai could sight-read them on the spot; Steve Vai is also known to have perfect pitch. Zappa referred to Steve as his "little Italian virtuoso"; he was listed in liner notes as "stunt guitarist". Steve's transcription skills can be seen in 'The Frank Zappa Guitar Book', a collection of transcribed solos released in 1983.

After leaving Zappa in 1982 he moved to California where he recorded his first album "Flex-able" and performed in a couple of bands. In 1984 he replaced Yngwie Malmsteen as lead guitarist in Alcatrazz with whom he recorded the album "Disturbing the Peace".

Following 1988's popular Skyscraper Tour, Vai left David Lee Roth's band. In 1989 Vai stepped into guitarist Adrian Vandenberg's shoes to record with British rock-group Whitesnake after Vandenberg injured his wrist shortly before recording was due to begin for the album "Slip of the Tongue".

The Guitars That Destroyed The World (Live In China)

The Story Of Light

Where the Other Wild Things Are