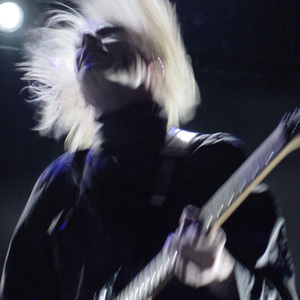 John William Lowery was born July 31, 1971 in Grosse Pointe, Michigan. He has played with Marilyn Manson, Loser, TWO, many more bands, and is currently playing with Rob Zombie and Meat Loaf. The name John 5 was given to him as he was the fifth replacement member to join Marilyn Manson, and also refers to a passage in the bible. He has two children. He was Marilyn Manson's guitarist from July 1998 to March 30th, 2004. He replaced Zim Zum, while he has yet to be replaced. Was he kicked out? According the John 5's offical website: "No, he wasn't.

He was Marilyn Manson's guitarist from July 1998 to March 30th, 2004. He replaced Zim Zum, while he has yet to be replaced. Was he kicked out? According the John 5's offical website: "No, he wasn't. John and Manson split amicable after five years of working together. Both came to a point in their career's where they wanted to try new directions. John was working on his first solo album after being prompted by Les Paul himself. Manson was looking into new directions, including his paintings and filmmaking. So after the Grotesk Burlesk tour they came to an amicable agreement and went their own ways. The two still have contact and still hold a great deal of admiration for one another. And John is still as big a fan of the band and their music as he was before he joined."

John 5 has recorded three solo albums. His solo material is a mixture of hard rock, progressive bluegrass, and country music, a mixture he calls "Blackgrass". His second solo album, Songs For Sanity, features guest appearances by Albert Lee and the award winning Steve Vai. John 5 is also close friends with Steve Vai who has been quoted as saying "John 5 is an underrated guitar giant. It's rare to hear a musician fuse various styles and create a unique blend and brand all of his own. It takes balls, but that's what's needed to be truly original." John 5 has also done a short movie called God Is Closed Vol. 1. Originally available on his official website, the film can now be purchased on the Japanese version of "Vertigo", available from the official site store. A clip of "God is Closed" is also available to see on John 5's MySpace page. John 5 has also recorded music for some TV commercials and video games. On April 4th 2007 John 5 released his follow up to 'Songs Of Sanity' entitled, 'The Devil Knows My Name'. On this particular album he teamed up with Slipknot guitarist Jim Root, Joe Satriani and Eric Johnson to create an instrumental album based on true storys about serial killers and criminals. For example the song '27 Needles' refers to 'Albert Fish' who when x-rayed by the police found 27 needles which he had put up himself for pleasure.

John reportedly loves junk food. k.d. lang says she never saw him eat a healthy meal when he toured with them. For his place on the k. d. Lang 1996 world tour, John is said to have been chosen from out of 200 guitarists. Some places say he was chosen out of 2000. Whatever the true number, he was the best choice.

He wanted to audition for MM in mid-1996 when Daisy left but missed the deadline and Mike Linton (who became Zim Zum) got the job instead. It wasn't until July 1998, when Zim left, that he was invited to join the band. Pogo, apparently, wouldn't speak to him at first, finally saying 'Why should I say hi to you? You're only gonna be in the band for six months.'
John proved his worth from the word go, however, (he stayed for 5 years) and Pogo now talks to him.

In 2005 John 5 played guitar for Rob Zombie during Ozzfest 2005 and also recorded eight out of ten tracks on the "Educated Horses" album which was released on Geffen Records in 2006. Due to conflicting commitments between John's band "Loser" and "Rob Zombie", John moved over to playing for Zombie full time in early 2006. Although John 5 had hoped that Loser would be able to find a temporary guitarist during conflicting tour dates, record company Island Records, decided to drop Loser altogether from their record label. "Being the founding member of Loser, my decision to leave was not an easy one," states John 5. "I've been juggling two careers both with Loser and Rob Zombie for over a year now. I found it impossible to be in two places at once."

Teaming up with an impressive array of people and bands over the years, John never limits himself to any one style. He recognizes that different forms of music all have something to offer. Country music and Bluegrass seem to be particular favourites, something that the members of Manson have teased him about.

John has a Fender guitar named after him: The John 5 signature Telecaster. There are three models, including a triple humbucker model and he determined the specifications for all.

It's Alive (& The Creatures)

Season Of The Witch (& The Creatures)

Careful With That Axe

God Told Me to

The Art Of Malice

The Devil Knows My Name