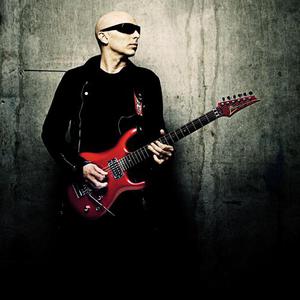 Joe "Satch" Satriani (born on July 15, 1956, in Westbury, New York and brought up in Carle Place, New York, USA) is an instrumental rock guitarist and teacher, and a recognized virtuoso of the rock guitar. Guitarists Alex Skolnick, Larry Lalonde, Steve Vai, Charlie Hunter and Kirk Hammett were among his students. Satriani often tours as the guitar playing trio G3, usually with Steve Vai. Joe Satriani was inspired to play guitar at age 14 after hearing that Jimi Hendrix had died.

Joe Satriani was inspired to play guitar at age 14 after hearing that Jimi Hendrix had died. Satriani reportedly heard the news during a football training session where he immediately confronted his coach and announced that he was quitting to become a guitarist.

When his friend and former student Steve Vai gained fame playing with David Lee Roth in 1986, Vai raved about Satriani in several interviews with guitar magazines. In 1987, Satriani's second album Surfing With the Alien produced popular radio hits, and was the first all-instrumental release to chart so highly in many years. Satriani also toured Australia and New Zealand with Mick Jagger in support of the Rolling Stones singer's solo album.

In 1989, Satriani released the album Flying in a Blue Dream. The album sold well, particularly in Texas. It was heavily promoted by KLBJ-FM in Austin. "One Big Rush" was featured on the soundtrack to the Cameron Crowe movie Say Anything. The song was also featured by the Dallas Stars' as their entry song at every period. "The Forgotten Part II" was featured on a Labatt Blue commercial in Canada in 1993. "Big Bad Moon", one of Satch's few singles with personally sung vocals, was a minor hit in late 1989.

In 1992, Satriani released The Extremist, his most critically acclaimed and commercially successful album to date. Radio stations across the country were quick to pick up on "Summer Song", while "Cryin'", "Friends" and the title track were regional hits. The album is now considered a rock classic.

In late 1993 Satriani joined Deep Purple as a short-term replacement for departed guitarist Ritchie Blackmore during the band's Japanese tour. The concerts were such a success Satriani was asked to join the band permanently, although his long-term contract with Sony prevented this happening.

In 1998 Satriani recorded and released Crystal Planet, Engines of Creation in 2000, and in 2001 released a Live album recorded at San Francisco in December 2000 which was also released as a music DVD.

2002 saw the release of Strange Beautiful Music. This was definitely a sign of what was to come, with a more rock and melodic feel to the album. This also resided on the next album, Is There Love In Space?, released in 2004.

In 2006 Satriani recorded Super Colossal and released another live album and DVD, Satriani Live. The last solo album recorded was released in 2008 called Professor Satchafunkilus and the Musterion of Rock.

In 2008 Satriani started a new side project with ex-Van Halen members Sammy Hagar and Michael "Mikey" Anthony, and Red Hot Chili Peppers drummer Chad Smith. By the end of 2008 they revealed the band's name as Chickenfoot. Their first album, titled Chickenfoot, was released in June 2009 .

The Elephants Of Mars