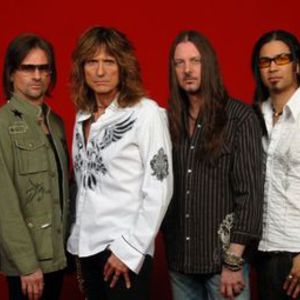 Whitesnake are an English hard rock band, founded in 1977 by David Coverdale (formerly of Deep Purple) in North Yorkshire. The current members of the band are Doug Aldrich (lead guitar), Reb Beach (rhythm guitar), Michael Devin (bass), Brian Ruedy (keyboards) and Brian Tichy(drums). In their early years, Whitesnake played in a hard blues-rock and heavy metal style. By the mid-80s, the band had moved towards a more commercial hair metal sound. They were named the 85th Greatest hard rock band of all time by VH1.

In their early years, Whitesnake played in a hard blues-rock and heavy metal style. By the mid-80s, the band had moved towards a more commercial hair metal sound. They were named the 85th Greatest hard rock band of all time by VH1.

Whitesnake were active primarily in the 1980s, but still tour, albeit with an entirely new line-up (bar Coverdale), to this day. Some of the most famous musicians who have joined the band for a time were: Jon Lord, Ian Paice, Cozy Powell, Neil Murray, Bernie Marsden, Micky Moody, Rudy Sarzo, John Sykes, Adrian Vandenberg, Vivian Campbell, Tommy Aldridge and Steve Vai.

The band's early material has been compared by critics to Deep Purple, not only because three past members of the band were once in Deep Purple, but also because of their sound and influences. Later, the band took on a sound more in line with the hair metal style popular in the mid to late 80s, although they never truly left their blues-rock roots behind

Formed in the late 1970s by David Coverdale after leaving Deep Purple, Whitesnake were originally a blues rock band with Jon Lord and Ian Paice from Deep Purple in the band. Despite several albums and constant touring, Whitesnake was unable to attain any significant commercial success in America, though were popular in the UK, Europe and Japan.

After acquaintance with Chris Cuttler, Fred Frith and most importantly, young guitarist John Sykes, David Coverdale decided to turn to a harder, more commercially viable sound. Whitesnake made their first major splash in the States in 1984 with "Slide It In", featuring the self-titled single as well as "Slow An' Easy" and "Love Ain't No Stranger". Sykes was not involved in any of the song writing for "Slide It In" though re-did some of Micky Moody's guitar work in the US Remix of the UK version of the album.

Three years later, thanks to radio friendly Zeppelin-ish songwriting and MTV friendly Tawny Kitaen's automobile acrobatics, Whitesnake became superstars with the album Whitesnake (titled 1987 in Europe, and Serpens Albus in Japan) Containing the US smash hits "Here I Go Again", "Is This Love", "Still of the Night" and others, the album eventually sold over 10 million copies.

Coverdale replaced the entire band for the subsequent tour, ditching Sykes for guitarists Adrian Vandenberg and Vivian Campbell. Also joining the band at this point were bassist Rudy Sarzo and drummer Tommy Aldridge.

Campbell left shortly after the tour (going on to replace Steve Clark in Def Leppard. Vandenberg, despite penning most of the material on the follow-up album, was unable to record due to a freak wrist injury. Guitar virtuoso Steve Vai was brought in to record all of the guitar parts for Slip Of The Tongue, which was released in the spring of 1989. Despite going platinum, the album did not reach the stratospheric heights of Whitesnake (entitled 1987 in Europe, and Serpens Albus in Japan). With a divorce looming, and the alternative 'grunge' movement threatening to destroy the melodic rock movement, Coverdale dissolved Whitesnake.

In the late 90s, David Coverdale and Adrian Vandenberg finally recorded together again. Initially intended to be a Coverdale solo effort, the Whitesnake name was eventually attached (much like the Tony Iommi/Black Sabbath projects of the late 80s). The resulting products were a new studio album entitled Restless Heart, and the live acoustic set, Starkers In Tokyo.

In the early 2000's Coverdale relaunched Whitesnake fully with an entirely new lineup centred around guitarists Reb Beach and Doug Aldrich (previously of Winger and Lion/Dio). This Whitesnake embarked on tours across the globe, releasing the "Live In the Still of the Night" DVD and "Live... In the Shadow of the Blues" on CD in 2006. A new studio album, "Good to be Bad", was released in 2008 reaching the top 10 in the UK album charts.

Over the last few years Coverdale has been involved in a remastering project which has seen all albums from 1978's Trouble, to 1989's Slip of the Tongue reissued with bonus material.

Whitesnake released Forevermore, on March 25, 2011 in Europe, and on the 29th in North America. They have released a number of scheduled 2011 tour dates on their website, with six scheduled UK tour dates and other European dates. In February 2011, Whitesnake was announced as one of the headliners to play the annual Rocklahoma festival in Pryor, Oklahoma, on Memorial Day weekend. A digital single for the song 'Love Will Set You Free' was released, along with a video for the song, on February 21.
The album Forevermore was released as a special edition 'Snakepack' through Classic Rock magazine on 25 March, a full 3 weeks before its commercial release. The fan pack includes the full, official new album Forevermore, a 132-page magazine, poster and pin badge. On 20 March 2011, Whitesnake announced that Brian Ruedy would play keyboards on the Forevermore World Tour.
The album did not chart highly upon its official release in the UK (number 33, possibly due to the copies released as part of the aforementioned Classic Rock Snakepack, which are not eligible for the charts). It did, however, show signs of Whitesnake's slow rebuild of support in the US with the album charting at number 49 - the band's highest charting album since the 80s.

Doug Aldrich and Reb Beach are Whitesnake longest standing guitar players, both being in the band 10 years by 2012.