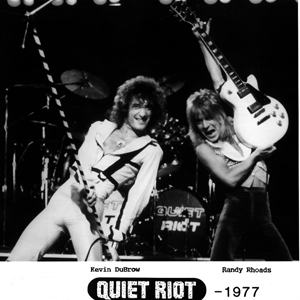 Quiet Riot is an american heavy metal band, whose 1983 chart topping success helped pave the way for the glam metal scene's next decade of commercial prominence. They are best known for their Metal Health album, which displaced Michael Jackson's Thriller album from the #1 chart spot. They were founded in 1975 by guitarist Randy Rhoads ( later with Ozzy Osbourne) with the original lineup featuring Kevin DuBrow (whose Steve Marriott influenced vocals powered most of their hits), as well as Kelly Garni (bass) and Drew Forsyth (drums).

They were founded in 1975 by guitarist Randy Rhoads ( later with Ozzy Osbourne) with the original lineup featuring Kevin DuBrow (whose Steve Marriott influenced vocals powered most of their hits), as well as Kelly Garni (bass) and Drew Forsyth (drums). Their initially released albums in 1977 & 1978 featured covers of British invasion era acts The Small Faces and Dave Clark Five and were picked up for release in Japan only.

After Rhoads left, and replacing him with guitarist Carlos Cavazo, they still had failed to break out of the Los Angeles metal scene with a record contract (unlike their hit British Invasion covering contemporaries Van Halen). Quiet Riot eventually scored a deal with Columbia Records and their second stateside single covered Slade's hit "Cum on Feel the Noize." (a remake of a big U.K. hit from 1973). The song spent two weeks at #5 on the US chart. It was the first heavy metal single to make the Top 5 on Billboard Magazine's "Hot 100 singles chart" . The band was reportedly reluctant to record the song, as none of them were Slade fans, and recorded it in one take, trying to play their worst. The success of the single helped carry "Metal Health" to the top of Billboard Music Charts pop album charts, making it the first heavy metal album to ever reach #1.

A #1 album and a top 5 single was unheard of for a heavy metal band in 1983. The "Metal Health" album also displaced Michael Jackson's "Thriller" album from #1. "Metal Health" paved the way for a new, stronger commercial viability for heavy metal.

The group's follow-up, "Condition Critical," was a relative disappointment critically and commercially, selling only 3 million units. This release included the Slade cover ("Mama Weer All Crazee Now" - a UK chart topper for Slade) and numerous musical and lyrical nods to the aforementioned act; whether this was a decision made the band or their producer is still subject to debate as evidenced in their VH1 "Behind The Music" documentary.

Various factors led to bassist Rudy Sarzo quitting the group in 1985 and joining up with Ozzy Osbourne. The bass slot in Quiet Riot was filled by Chuck Wright. Next, the band released "QRIII" in 1986, another commercial failure. Fed up with DuBrow's antics, the rest of Quiet Riot fired him from his own band and replaced him with former Rough Cutt vocalist Paul Shortino. Wright was also fired and was replaced by Sean McNabb. The band released "Quiet Riot" in 1988, which was another failure. This 1988 album technically has the same name as their original first album with Randy Rhoads. The band fell apart after a tour that ended in Hawaii in 1989 and DuBrow fought to keep control of the name.

By 1991, tempers had cooled enough for the former bandmates to communicate. DuBrow and Cavazo formed HEAT, but eventually switched to Quiet Riot again and released "Terrified" (1993) with Banali and Kenny Hillery (bass). That same year DuBrow released "the Randy Rhoads Years" featuring tracks from Quiet Riot's Columbia albums and some previously unreleased material (many of which featured newly recorded vocals). Hillary left in 1995 and committed suicide on June 5, 1996; Wright rejoined Quiet Riot to play bass. The band released "Down to the Bone" that same year. The following year (1996), the band released a "Greatest Hits" album, which included nothing from the original two Rhoads albums and nothing from the two 90's albums, but did have a few tracks from the 1988 Shortino album. After that, Rudy Sarzo joined up again in 1997, and the band began touring.

The tour was not successful, and the band was arrested several times; one angry fan sued DuBrow for injuries sustained during a show. The group still managed to release "Alive and Well" in 1999 which featured new songs and several rerecorded hits. They followed this up with "Guilty Pleasures" in 2001.

Quiet Riot officially broke up in February 2003, and Sarzo joined Dio in the following year. However, they reunited in 2005 with the line-up being made up of DuBrow, Banali, Wright, and guitarist Alex Grossi. The band joined the Rock Never Stops Tour in 2005 with Cinderella, Ratt, and Firehouse.

As of January 2006, Chuck Wright and Alex Grossi had left the band and former L.A. Guns/Brides of Destruction guitarist Tracii Guns had joined, only to leave two weeks later under musical differences. Other recent members of Quiet Riot have included guitarists Billy Morris and Neil Citron, and bassists Tony Franklin, Sean McNabb and Wayne Carver. In an interview with rock & roll comic C.C. Banana in August 2006, Frankie Banali attempted to clarify the matter of Quiet Riot's recent rapid-fire membership rotation, indicating that both Alex and Chuck were both back in the band again.

On July 13, 2007, Quiet Riot performed at glam metal festival "Rocklahoma." Then on September 19 they gave a free show to service members on Keesler AFB in Biloxi, MS

Kevin DuBrow died November 25, 2007, at his home in Las Vegas, at age 52. Cause of death was an accidental overdose of cocaine.

Despite his previous insistence that Quiet Riot could never return as a live performing entity, in September 2010, Frankie Banali announced a new version of Quiet Riot: himself on drums, Chuck Wright on bass, Alex Grossi on guitar and newcomer Mark Huff on vocals. The band has sought the blessings of the DuBrow family, has recorded new versions of classic hits with Huff singing, and is seeking to do a full US tour.

One Night In Milan