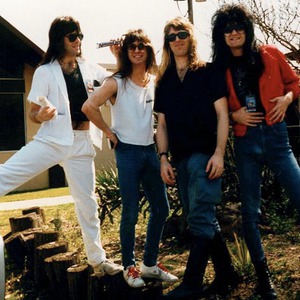 A band from Canada(twice being nominated for a Juno award), the Killer Dwarfs were known for their quirky humor, such as all the members surprisingly going by the surname of Dwarf. Lead singer Russ Dwarf only stood in at 5'4", but the rest of the band was rather tall despite rumors that you had to be under a certain height in order to join. The Killer Dwarfs arose from the ashes of vocalist Russ "Dwarf" Graham and drummer Darrell "Dwarf" Millar's club bands in Toronto, Ontario in late 1981.

Rounded out by Bryce "Dwarf" Trewin (guitar) and Ange "Dwarf" Fodero (bass) the band released their self-titled debut album. It would be three years before the follow-up was released; due in part to Bryce and Ange leaving because they thought the band was going nowhere. They both left the band in 1984 to be replaced by Mike "Dwarf" Hall and Bad Ronbo Dwarf (Mayer).
Stand Tall saw the band make inroads, with help from the hilarious videos for "Stand Tall" and "Keep The Spirit Alive", and by 1988 the Killer Dwarfs were signed to a major label. "Big Deal" and "Dirty Weapons" would prove to be the band's commercial peak (with "It Doesn't Matter" have some rock radio success), as both releases reached the Billboard charts. Mike Hall would leave to be replaced by guitarist Gerry "Dwarf" Finn on the final studio release. Method To The Madness failed to find much of an audience and the band was dropped. Around this time Russ Graham had a family crisis to attend to and in 1995 the Killer Dwarfs were put to rest.
Russell Graham released an album fronting a band called Penny Black while Darrell Millar is a current member of Laidlaw. Guitarists Hall and Finn joined Helix for a short period of time in 2000. In 2001 the classic Big Deal line-up returned to tour and bring their outrageous humor and stage show to the masses once again. A new studio album, the first in over ten years, is now in the works.

Method To The Madness