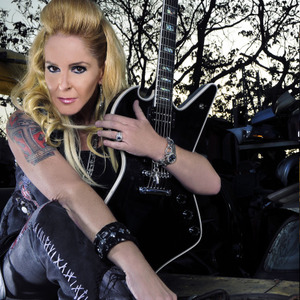 Lita Ford (born Carmelita Rossanna Ford on September 19, 1958 in London, U.K.) is a hard rock singer and guitarist who achieved popularity during the 1980s. Ford was born in London but is of Italian heritage. She moved with her family to the United States while still very young. She began playing the guitar at age 11. In 1976 at the age of 17 she became one of the founding members of the legendary teenage all-female proto-punk-metal band The Runaways. There she played lead guitar.

In 1976 at the age of 17 she became one of the founding members of the legendary teenage all-female proto-punk-metal band The Runaways. There she played lead guitar.

After the group folded in 1979, she began a solo career. Her guitar playing was well respected amongst her peers, both when she was a member of The Runaways and as a solo act. When she had the material to back her up, Ford was inarguably capable of rocking out aggressively and assertively, and more times than not, better than the best of her male counterparts. Her first two albums, Out for Blood and Dancin' on the Edge were relatively successful, and in 1985, Ford was nominated for a Grammy Award for Best Female Rock Performance for "Gotta Let Go", along with Wendy O. Williams and Pia Zadora. However the musical genre of "arena metal rock" had already crested and was now beginning its decline in the second half of the 1980s.

Nothing was heard from Ford for the next four years; a follow-up to Dancin' on the Edge, titled The Bride Wore Black, was abandoned and never released, as Ford switched from Mercury Records to RCA Records. By the time Ford returned again, the lighter pop-metal she had long favored had broken through to mainstream audiences, which set the stage for her most commercially successful album, 1988's Lita. With Sharon Osbourne as her manager, and slickly produced by Mike Chapman, the album featured Ford's first commercial hit, the #12 "Kiss Me Deadly". Its follow-up ballad, a duet with Ozzy Osbourne entitled "Close My Eyes Forever", provided both artists with their first Top Ten single.

Lita Ford is back with a vengeance! Her new album Wicked Wonderland is due for release October 6th 2009. More information can be found on her My Space profile: Lita Ford Official My Space Profile

The Best Of Lita Ford