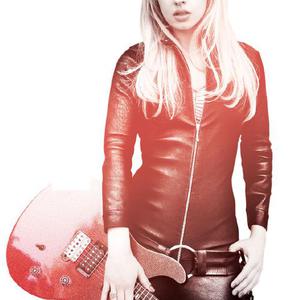 Orianthi Panagaris (born 22 January 1985 in Adelaide, South Australia), better known simply as Orianthi, is a Greek Australian musician, singer-songwriter and guitarist whom has released 2 albums ("Violet Journey" and "Believe") and one EP ("Fire"). She is perhaps best known for being Michael Jackson's lead guitarist for his ill-fated "This Is It" concert series, as the lead guitarist in Alice Cooper's live band, and for her hit single "According to You".

Her debut album "Violet Journey", was officially released in 2007 through Universal Music (it was self released earlier in 2005), in which she composed all the material, contributing guitar, vocals and drums on most cuts. She also produced and mixed the final product at her home studio.

Her breakthrough came with her debut single (which is off her second album "Believe") "According To You" which peaked at #3 in Japan, #8 in Australia and #17 in the US. Her second album, "Believe", received a worldwide release in late 2009 (the album was re-released on 8 June 2010 as "Believe (II)", which included four new songs). Orianthi's Third full length album, titled "Heaven in This Hell" is set to be in the first few months of 2013.

Orianthi first started learning piano and playing at the age of three and moving to acoustic guitar at the age of six. She learned to play the acoustic guitar at six at the encouragement of her father, started electric when she was eleven and left her school, Mercedes College, enrolling at Cabra Dominican College. At the age of 15, she turned her focus to writing songs and so began her professional career. She has been playing in bands since 1999 England and in France, and performed in her first stage show for Steve Vai at the age of 15.

Orianthi has appeared on several late night shows, most notably on American Idol results show 26 March 2010. In 2010 she toured extensively with headlining shows in the US, Japan, Australia and Malaysia. She also opened for other artists including: John Mayer, Mika, Kid Rock, Daughtry and over 30 dates for Adam Lambert's Glam Nation Tour with former Idol contestant Allison Iraheta. Orianthi has performed at various music festivals and charity functions most notably at the Stand Up to Cancer telethon.

Orianthi has been very prolific in collaborating and being featured by many artists. She is featured on Iraheta's third single "Don't Waste The Pretty" and on Fefe Dobson's song "Can't Breathe" which appears on Dobson's album Joy released in November 2010. She has stated that the people she has collaborated with (i.e. Allison Iraheta and Lacey Mosley) are some of her best friends.

She recorded for the song Saadda Haq composed by Academy award winning composer A.R.Rahman for a Bollywood film soundtrack Rockstar. The song became popular and lot of media coverage in India came for Orianthi, being cited for her time as Michael Jackson's lead guitarist.

In 2009, Orianthi was included on a list of "12 Greatest Female Electric Guitarists" by Elle magazine and won the "Breakthrough Guitarist of the Year" award from Guitar International magazine in 2010.

On 12 October 2011, the 5 track EP "Fire", produced by Dave Stewart was released as an iTunes download.

Heaven In This Hell