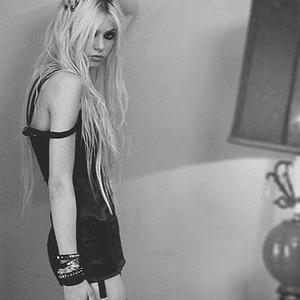 The Pretty Reckless is a New York based alternative rock band fronted by American actress and model Taylor Momsen. Other members include Ben Phillips (rhythm guitar, back vocals), Mark Damon (bass), and Jamie Perkins (percussion). On December 30, 2009, the band released a promo song entitled Make Me Wanna Die which was later launched on the soundtrack to the 2010 film Kick-Ass. The first EP for their album was released on June 22, 2010 and the full record "Light Me Up" was released August 27, 2010 in the UK and on February 8, 2011 in the USA.

In an interview with MTV, Momsen revealed the influences on the band include The Beatles, and Audioslave, along with many grunge bands, such as Soundgarden, and Nirvana. She also stated that her personal influences also include Kurt Cobain, Debbie Harry, Joan Jett, Cherie Currie and Courtney Love.
Their second EP, Hit Me Like A Man was released in March of 2012, including 5 tracks, 2 of those being live versions of some of their biggest hits.

Death By Rock And Roll

Who You Selling For