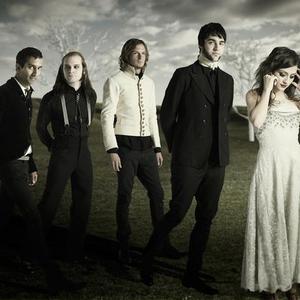 Flyleaf is an American rock band, formed in Belton, Texas, United States in 2000. They originated as a band called Listen, and then changed name to Passerby, but due to an existing band owning the rights to that name, their name was changed to Flyleaf after they were signed to their record label. "A flyleaf is the blank page at the front of a book," explains Lacey Mosley, Flyleaf's vocalist. "It's the dedication page, the place you write a message to someone you're giving a book to.

And, that's kind of what our songs are -- personal messages that provide a few moments of clarity before the story begins".

Their music is a mix of hard rock styles. The band cites influences such as Rage Against the Machine, Foo Fighters, Incubus, The Smashing Pumpkins, and Nirvana.

Early on, vocalist Lacey Mosley began playing music with drummer James Culpepper. Later on guitarists Jared Hartmann and Sameer Bhattacharya were recruited. "Sameer and Jared are really experimental with melodies and pedals, and we all had different influences that were all blending together with the same passionate and hopeful heart, and that brought out this beautiful feeling. It was magical," said Mosley. When they were still playing as Listen, they played with bassists Josh C. and Jonathan B.. The bassist was replaced by Kirkpatrick Seals in 2002 after he left his previous band The Grove.

All five members of the band are of the Christian faith. This faith in Jesus influences their music, but lead singer Lacey Mosley doesn't necessarily believe that makes Flyleaf a strictly Christian band. "We all share the same faith. And so when we deal with the whole 'Christian band thing,' we kind of think about something P.O.D. says, like, 'If you're a Christian, it affects everything in your life. So if you're a plumber, does that make you a Christian plumber?'" Mosley said. "I don't know the answer. We're a band, it's part of who we are, so it comes out in our music, and it's the fuel for what we do. And finding Christ saved my life. So I'm not ashamed of it at all. And most of our album reflects that".

Flyleaf released a song "Cassie" that was about the shooting of Cassie Bernall and Rachel Scott. They were shot in the head after admiting they were Christian. This is just one example of how Flyleaf are touched by events and touch others through their music.

Flyleaf released their first full-length studio album, "Flyleaf", in October 2005. The album was re-released in United States in October 2007 along with their latest digital EP, "Much Like Falling", that was released onto the iTunes store. The re-released version of "Flyleaf" contains additional acoustic tracks.

On the 10th of November 2009, Flyleaf released their second album, called "Memento Mori". The album is a little less heavy than their debut album. Two songs that were released before the official release are "Beautiful Bride" and "Again".

Songfacts reports that their third album will be called "New Horizons". The title track premiered on 89X Radio on August 1, 2012, and will be released on iTunes on August 21, 2012.

Between The Stars (Deluxe Edition)

Between The Stars (Special Edition)

Set Me On Fire (CDS)

How He Loves (CDS)