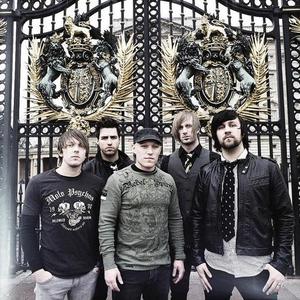 Kutless is a christian alternative band, originally from Portland, Oregon, specializing in melodic hard rock. The band gets their name from the promise made in Romans 6:23. The band says, "He took the cuts for us...making us Kutless." Kutless consist of Jon Micah Sumrall (vocals), James Mead (guitar), Dave Luetkenhoelter (bass), and Jeff Gilbert (drums) and Nick Departee (guitar). Kutless's albums are released by BEC Recordings, a company owned by Tooth & Nail Records.

Kutless's albums are released by BEC Recordings, a company owned by Tooth & Nail Records. Kutless has toured with The O.C. Supertones and also with other prominent artists, such as TobyMac of DC Talk and Audio Adrenaline.

The group is currently touring with the Newsboys on the Go Tour.
The group also headlined The Hearts Of The Innocent Tour Powered by Suzuki in America last year with Disciple, Red, and Run Kid Run. Kutless was the first band to be sponsored by Suzuki Motor Sports.

A video of the band's song 'Tonight' has been featured on MTV2, and many of their songs have been played on TVU and hundreds of Christian radio stations. Their first single 'Run' holds the record for the longest charting song in the history of the R&R Top 40 charts. Kutless's song "All The Words" was featured in an episode of the hit TV show Scrubs. Their music video "Shut Me Out" was featured on the Target TV (Red Channel) in May 2006 and was part of a XBOX giveaway.

On December 5, 2006, Kutless released their first live CD/DVD combo titled 'Live In Portland' which highlights the electrifying performance of this great rock band. Their sixth album, To Know That You're Alive, was released June 24, 2008. It continues the band's diverse style, whilst also tapping into the harder tones of the band's first two albums.

King Of My Heart (CDS)

This Is Christmas (EP)

It Is Well (Expanded Edition)