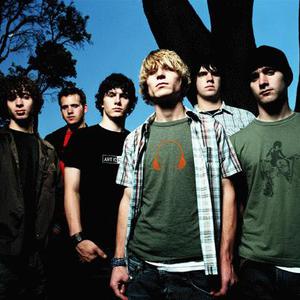 Falling Up is a hard rock/prog rock/experimental indie band from Oregon. Under the label BEC Recordings, Falling Up recorded and released 5 full length albums including Crashings (2004), Dawn Escapes (2005), the remix album Exit Lights (2006), Captiva (2007) and Fangs (2009), along with a relentless touring schedule and numerous radio singles. The band started with a hard rock, almost nu metal sound and have progressed to prog rock slowly over their career.

After a year off, the band began to discover the original vision and aspirations they had when first forming the group back in 2000. So with the help of fans/supporters and their donations, the band was able to raise a budget and independently record and release their 6th studio album.

Your Sparkling Death Cometh was released in 2011. Tracked at 'Fangs' producer Casey Crescenzo's studio down in California. The band headed up the operation - Produced by Jessy Ribordy, Mixed by Josh Shroy, and with help in Engineering by Casey Crescenzo and Jeremy Miller.

Discover The Trees Again: The Best Of Falling Up