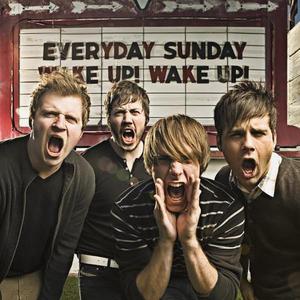 From Columbus Ohio, Everyday Sunday was signed by Flicker Records following their 2001 independent release of "Sleeper." Under Flicker, they have produced two full length albums: 2002's "Stand Up" and 2004's "Anthems For The Imperfect." Their most recent album is "The Best Night of Our Lives." The only original member of the band that remains is lead-singer Trey Pearson. Also in the band are Nick Spencer and Tyler Craft, and most recently Micah Kuiper (also of The Cast and Crew). Former members include Andy, Jason, Jesse, Brad, Dan, Chris, and Kevin.

The video for "Lose It Again" was voted the number five song of 2003 on TVU Music Television.

Best Night Of Our Lives

The Best Night Of Our Lives

Wake Up! Wake Up!

Anthems For The Imperfect