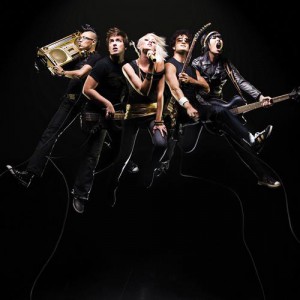 Superchick, originally known as Superchic, is an American contemporary Christian band. Their music incorporates various styles such as pop, punk, rock, rap, and R&B. Their sound has been compared to mainstream artists No Doubt and Avril Lavigne. Superchick has had five songs hit number one on music charts, and their song "Stand in the Rain" held the number one spot for nine weeks on R&R Christian Hit Radio (CHR) chart in 2006/2007. History

Superchic[k] made their debut in 1999 at an Audio Adrenaline concert in front of an audience of 5,000. They continued to perform at live events throughout that year, self-releasing their first album in 2000. The album was re-released with three added remix tracks after they signed to Inpop Records, and became their first official album: Karaoke Superstars. Since then, their music has appeared in several movies and television shows, including the movie Legally Blonde and the made for TV, Disney movie Cadet Kelly. Superchic[k] signed with mainstream record label Columbia Records to promote their 2005 album Beauty From Pain, resulting in their 2006 mainstream debut Beauty From Pain 1.1. The re-release album contains their signature hit "Stand in the Rain". Their music has received favorable reviews in both Christian and mainstream publications. On December 4, 2008, Superchick was nominated for their first Grammy Award. The group was recognized in the category of "Best Rock Or Rap Gospel Album" for their 2008 album, Rock What You Got. The band launched their "Hey! Hey! (That's Freedom You Hear)" Tour on April 3, 2009.

Rock What You Got