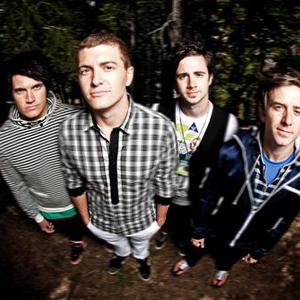 From the opening salvo of Stellar Kart's third album Expect the Impossible, it's evident that the Dove Award-winning band is revolutionizing its sound with this adventurous, spirited, and totally unexpected pop ?n' roll project. Returning to helm the project is producer Ian Eskelin (All Star United), who also shepherded Stellar Kart's breakthrough sophomore album, We Can't Stand Sitting Down. That CD yielded the No.

Returning to helm the project is producer Ian Eskelin (All Star United), who also shepherded Stellar Kart's breakthrough sophomore album, We Can't Stand Sitting Down. That CD yielded the No. 1 hit, ?Me And Jesus,? which also earned the band its first Dove Award for Rock/Contemporary Recorded Song of the Year. ?Content, content, content,? Eskelin declares. ?The music is awesome, the energy is off the charts, but what sets Stellar Kart head and shoulders above the vast majority of its contemporaries is content. These guys are not afraid to say what they believe, straight up, without trying to couch it in some namby-pamby metaphor.?

?We are all fans of different kinds of music, and a lot of times we find ourselves listening to songs that we love, but the message is just terrible,? frontman Agee explains. ?We talk with kids after concerts and are always hearing from youth leaders about the issues facing teens today. We wanted to write songs that would address such topics and encourage kids to expect God to work in their daily lives. That is what we have been about from day one. That is what we are still about.?

If it is true that first impressions are the most important, Stellar Kart goes for broke on its first radio single: the blazing, no-holds-barred confessional, ?Jesus Loves You.? An impassioned song about conviction and redemption, it cuts through the comfortable shades of gray with an unabashed declaration that ?Jesus Loves You,? whether you believe it or not.

?The reason I do what I do now is because of what I didn't do when I was younger,? Adam explains of the song's bold lyrics. ?I grew up in church; my dad was a pastor. I accepted the Truth at an early age, but I was a kid just trying to get by. I didn't really do anything with my faith until I got to college. That was when I started to realize there was more to life than just getting by.?

?The bottom line is, we are not doing this just to make music. We want people's lives to be changed,? Brian interjects.

Stellar Kart proves it can thrive in a broad range of musical realms as Expect the Impossible sustains its momentum with tracks like the classic rock anthem, ?Shine Like The Stars? and genre-defying, fist-pumping, ?Eyes,? with its synth-laden 80's groove and Beach Boys-esque, feel-good, summertime melody.

??I Give Up' is hands down my favorite song on the album,? the band's classically trained guitarist, Cody Pellerin adds. ?It's the kind of song that got me into playing music in the first place. It's rock ?n' roll. It's Judas Priest meets Van Halen meets Motley Crew. I got to just rip it up on the guitar, which is what I really love to do. I know some people may listen to it and think, ?Wow, that doesn't sound like Stellar Kart,' But this is where we are musically. And I think it is a good progression for us and our fans.?

?Sonically, we wanted to shoot for a broader sound,? Eskelin says. ?Stellar Kart has never been afraid to challenge the current trend, so we decided to incorporate some new elements. This album will please the band's die-hard punk fans while offering something to straight-up pop and rock lovers as well. The goal is to meet listeners where they are, driving an emotional connection to the music.?

Stellar Kart puts an exclamation point on Eskelin's statement with such diverse tunes as the tender-and-tough pop ballad, ?Pray,? in which Adam encourages listeners to ?Pray...Even if you think you are not good enough.' The bouncy, infectious, ?The Right One,? evokes strains of such pop/rock legends as The Beach Boys, The Cyrkle, and their more contemporary offspring like Weezer and Jimmy Eat World. The happy-go-lucky anthem ?Sunshine? boldly asserts that Stellar Kart is as much a bona fide pop band and serious chart contender as it is a punk quartet.

Which is not to say the band has abandoned its punk roots. ?Automatic? has enough head-nodding hooks and frantic drum kicks to satisfy punk purists. And frontman Adam Agee even manages a couple of authentic rawk screams on ?Eyes? and ?Innocent.?

But as satisfying as Stellar Kart's expanding musical repertoire is, it's the lyrical honesty coupled with the band's personal growth that most radically informs Expect the Impossible. ?We are a pop band,? Adam explains. ?When we made our first record we were young, and it reflected who we were at the time. The next record reflected a natural progression. Expect the Impossible is the next step. It is casting a wider net. It gets more people involved.?

?I love seeing kids attach themselves to something bigger than just school or work or friends or the latest fad,? Brian adds.

Everything Is Different Now

We Can't Stand Sitting Down

All Gas. No Brake