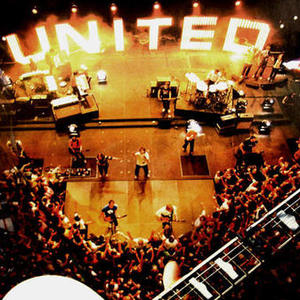 Hillsong United is an Australian worship band. They started as the youth ministry band from Hillsong Church in Australia. Their music is praise and worship with a contemporary style that is a mix of contemporary Christian music and mainstream rock. The band was formerly named "United Live" and was led by Reuben Morgan and Marty Sampson. United Live made its first album in 1999 after a suggestion from worship pastor Darlene Zschech to Reuben Morgan.

(This has been mentioned by Reuben in the documentary section of the United We Stand DVD) Following the advice, Reuben and Marty led the team in making their very first album, Everyday. They subsequently recorded 3 more albums with Reuben before changing the band's name from 'United Live' to 'Hillsong United' after Reuben's departure in 2002. Joel Houston, the son of the church's senior pastor, replaced Reuben, and stepped up to lead the group together with Marty. The band has toured in a number of countries, and their 2006 release United We Stand was the best selling album of 2006 in Canada at Christian retail stores.

Other members of Hillsong United include Jonathon Douglass (J.D.), Jadwin Gilles, Annie Garratt, Bec Gilles and Michelle Fragar who is the daughter of Russell Fragar also associated with Hillsong. Michael Guy Chislett plays guitar for Hillsong United and Matthew Tennikoff plays bass guitar. Popular New Zealand artist Brooke Fraser also makes contributions to the Hillsong United albums, (2005-) most recently in "All Of The Above" with the song "Hosanna" among others. There are many drummers that play for United including Rolf Wam Fjell who is the main drummer for Hillsong Music

To date in 2008, Hillsong United have released the first part of the I Heart Revolution recordings; 'With Hearts as One', made live around the world during the band's recent tours. The CD features previously released United tracks recorded live in different locations, and the first installment of a live DVD.

On February 14, 2012, 'LIVE IN MIAMI (Welcome to the Aftermath)' was released. It contained songs from both the album Aftermath, and several other of their greatest hits, such as "The Stand," "With Everything," and "Your Name High." It was also the first fully recorded Hillsong United tour.

Are We There Yet?

Of Dirt And Grace (Live From The Land)