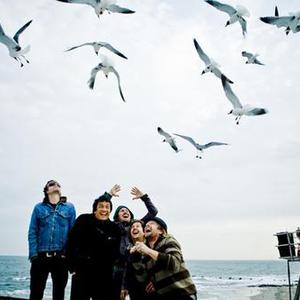 Switchfoot is a grammy-winning alternative rock band from San Diego, California, United States. The band was formed in 1996 with the brothers Jon Foreman (lead singer/guitarist) and Tim Foreman (bass). Long-time friend Chad Butler (drums) joined soon after. Eventually the band evolved to what it is today with the addition of members Jerome Fontamillas (key/guitar/electronics - formerly of Mortal and Fold Zandura) and Drew Shirley (guitar - formerly of All Together Separate).

Although the band started out playing at Christian music festivals, they shun the label of "Christian rock," with singer and guitarist Jon Foreman saying, "For us, it's a faith, not a genre. We've always been very open and honest about where the songs are coming from. For us, these songs are for everyone. Calling us 'Christian rock' tends to be a box that closes some people out and excludes them. And that's not what we're trying to do. Music has always opened my mind -- and that's what we want." They started out on Charlie Peacock's label "re:think" and spent several years appearing at Christian festivals and enjoying Christian radio hits. Most of their early tours were with Christian bands and both of the band's new members were borrowed from Christian bands.

Switchfoot did not see success outside of the Christian rock scene until they were featured alongside singer Mandy Moore on the A Walk To Remember Soundtrack. The band's first true commercial success came in 2003 with the release of their fourth major label (and first mainstream label) offering, The Beautiful Letdown. The album went on to sell more than 2 million albums and Switchfoot became the most popular rock band to be associated with Christian music.

They were featured on the British Edition of the Spiderman II soundtrack along with the likes of Taking Back Sunday and Dashboard Confessional to name a few, in 2004 with the song 'Meant To Live'.

In 2005 Switchfoot released "Nothing Is Sound". The album went gold within 3 months and received much critical acclaim.

On November 10th, 2009, Switchfoot released their first album produced under their own label, lowercase people. "Mess of Me", a single from the album released months before the CD, has enjoy chart-topping radio plays since its release.

On September 27th, 2011, to much anticipation and excitement, Switchfoot released their newest album, "Vice Verses".

This Is Our Christmas Album

I Need You (To Be Wrong) [Lovelytheband Remix] (CDS)

Live From The Native Tongue Tour