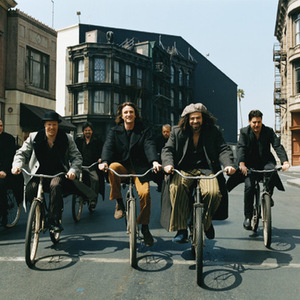 Counting Crows is an American rock band originating from Berkeley, California, formed in 1991. They gained fame in 1993 following the release of their debut album "August and Everything After" featuring the hit song Mr. Jones. The band is formed by singer Adam Duritz (previously of The Himalayans and Sordid Humor) and guitarist David Bryson (Local producer and former member of the band Mr. Dog) in San Francisco, California in 1990.

Counting Crows originally performed as an acoustic duo, playing gigs in and around Berkeley and San Francisco. For the first album, Adam and David added bassist Matt Malley, the multiinstrumental Charlie Gillingham, and Drummer Steve Bowman. David Immergluck was the second guitarist on the first album, but did not officially join the band until 1999. Guitarist Dan Vickery was added just as the band set out on their first tour.

Counting Crows, with their intimate and melancholy approach, achieved a large fan base among Generation X alternative rock fans who were looking for something different from the raging guitars of the Seattle music scene.

The band's most recent success included a .. 1 hit with the song Accidentally In Love, which was featured on the Shrek 2 soundtrack (which has sold over 1,000,000 copies), as well as nominations last year for a Grammy Award, a Golden Globe Award and an Academy Award for the track. To date the band has sold over 20 million CDs worldwide. In 2004 the band released their first ever Best Of set, Films about Ghosts, which featured songs from every phase of the Counting Crows recording career.

The new album, Saturday Nights & Sunday Mornings, was released on March 25th, 2008. However, on January 16, 2008 the band released a digital EP as a free download on their official web site, consisting of the songs 1492 and When I Dream Of Michelangelo. The lead single from the album is You Can't Count On Me, which was released for radio play on February 4, 2008.

The album itself is thematically and stylistically divided into two parts: the first, more rock-influenced Saturday Nights, and the second, more country-influenced Sunday Mornings. Theme changes along with style; in the Sunday Mornings portion of the album, songs become more reflective. The iTunes release contains several bonus tracks, including a track-by-track interview with Duritz.

August and Everything After

Echoes Of The Outlaw Roadshow

Underwater Sunshine (Or What We Did On Our Summer Vacation)

August And Everything After: Live At Town Hall

Films About Ghosts (The Best Of...)